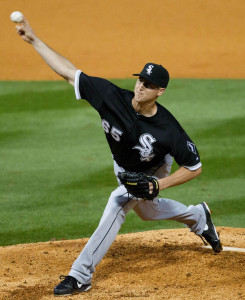 White Sox setup man Nate Jones underwent Tommy John surgery yesterday, tweets MLB.com’s Scott Merkin. Dan Hayes of CSN Chicago tweets that Jones, who was on the disabled list recovering from a back injury, tore his ulnar collateral ligament while ramping up his rehab from his previous injury.

The 28-year-old was thought to be the favorite to take over the closer’s role in Chicago following Addison Reed’s trade to Arizona, but manager Robin Ventura instead went with Matt Lindstrom to open the season in that role. Jones made just two appearances this season and didn’t record an out, allowing four runs on a pair of hits and three walks.

The operation will likely sideline him through next summer, which is a tough break, considering that he is arbitration eligible for the first time this offseason. Jones had a 3.31 ERA with 9.3 K/9 and 3.5 BB/9 through his first two seasons with the South Siders, so a strong 2014 would have positioned him for a nice payday.