3:08pm: The Athletics will pay just $1MM of the $2.3MM remaining on Dunn’s contract, Slusser tweets.

10:45am: Dunn will join the A’s tomorrow, Susan Slusser of the San Francisco Chronicle tweets.

10:38am: The A’s have acquired Adam Dunn from the White Sox in exchange for minor league pitcher Nolan Sanburn, the team announced. Though the A’s were on his limited no-trade clause, word broke this morning that Dunn, who has never played in the postseason, was willing to waive that clause in order for a chance to win. 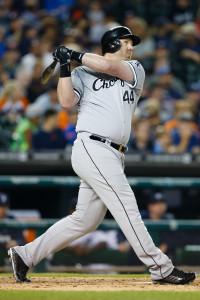 Dunn, 34, is hitting .220/.340/.433 with 20 homers on the season, and his numbers against right-handed pitchers are even better: .232/.357/.457 with 18 homers. The hope for the A’s is that adding some left-handed pop can help to spark an offense that has gone dormant in the month of August. Though the A’s still lead the Majors in total runs scored, they’re hitting just .248/.324/.394 this month and they’re tied with the Phillies for 20th in runs scored this month at 102. Many fans attribute those struggles to the decision to trade Yoenis Cespedes, and in Dunn, Oakland will receive a hitter whose wRC+ of 114 is similar to the 113 mark posted by Cespedes.

Those offensive struggles for the A’s have been a significant factor in the team’s fall from atop the American League West. They’ve had a particularly difficult time scoring runs against the now-division-leading Angels, as Anaheim has outscored the A’s by a score of 10 to three thus far in their four-game series. Oakland has been shut out in each of the past two contests against the Halos and has fallen to four games back in the division. They are still, however, in position to finish as one of the Wild Card winners.

John Jaso has served as Oakland’s left-handed DH quite a bit this season, but the A’s recently placed Jaso on the seven-day disabled list due to concussion-like symptoms, and they’ve been mixing and matching with Brandon Moss, Coco Crisp, Derek Norris and Gomes of late. Crisp, however, has recently re-strained his neck, which could lead to more outfield time for Moss, especially if Crisp is out for a significant amount of time.

Dunn is earning $15MM in the final season of a four-year, $56MM pact with the White Sox, meaning he is owed about $2.54MM for the month of September. Presumably, that salary commitment and Dunn’s well-documented defensive limitations allowed him to clear waivers. This marks the fourth significant trade of the summer for the A’s, who have acquired Sam Fuld, Jeff Samardzija, Jason Hammel, Jon Lester and Jonny Gomes in other deals.

In Sanburn, the Sox will acquire a right-hander that ranked 12th on MLB.com’s midseason list of top 20 Athletics prospects. The 23-year-old was Oakland’s second-round pick back in 2012 and has pitched to a 3.28 ERA with 9.2 K/9 and 3.2 BB/9 in 71 1/3 relief innings at Class-A Advanced this season. He’s finished 23 games and picked up six saves in his time at Stockton.

Sanburn has been plagued by some shoulder issues, but he also has less mileage on his arm than many pitching prospects due to the fact that he was an outfielder in college and for part of his time in college at Arkansas. Jim Callis and Jonathan Mayo of MLB.com note in their free scouting report that Sanburn touched 99 mph in college and offers a curveball with good depth as well. The MLB.com duo notes that Sanburn has a promising slider and changeup as well, but concerns over his durability have led to a bullpen role this season in Oakland.