The Astros announced that they have acquired catcher Hank Conger from the Angels in exchange for fellow catcher Carlos Perez and right-hander Nick Tropeano. 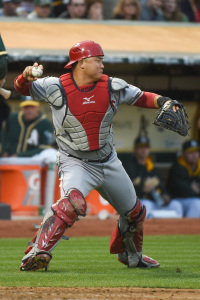 Conger, 26, split time with Chris Iannetta in Anaheim this past season but wasn’t a traditional backup catcher, as he received about 40 percent of the club’s plate appearances at the position. A former first-round pick, Conger batted .221/.293/.325 with four homers and is a lifetime .224/.294/.353 hitter in 768 plate appearances. Conger frequented top prospect lists prior to reaching the Majors, twice making Baseball America’s Top 100 (No. 79 and No. 84) and four times appearing on the Top 100 list of Baseball Prospectus (ranging between Nos. 81-89).

Though Conger’s bat hasn’t picked up at the Major League level to match his excellent Triple-A track record (.298/.371/.470), the Astros have plenty to like about his work behind the plate. He caught a slightly below-average 24 percent of base-stealers in 2014, but shined in terms of pitch-framing according to both Baseball Prospectus and StatCorner.com. Both metrics rated him as one of the four best framing catchers in baseball. The arbitration-eligible Conger is projected by MLBTR contributor Matt Swartz to earn $1.1MM this season and can be controlled via the arbitration process through 2017.

As for the Angels, they’ll get the type of cost-controlled rotation option they spent much of last offseason searching for during the infancy of the 2014-15 offseason. Tropeano, 24, made his big league debut with the Astros in 2014 and posted a 4.57 ERA with a 13-to-9 K/BB ratio and a 40.3 percent ground-ball rate in four starts (21 2/3 innings).

Baseball America ranked Tropeano as the No. 18 prospect in Houston’s system heading into the 2014 campaign and has praised his outstanding changeup multiple times in the past, grading it the best change in the Astros’ system in 2011-12 as well as the best change in the South Atlantic League in 2012. BA wrote in their scouting report that Tropeano sat 90-92 mph with a plus changeup and fringy slider that needed more work, but they also noted that he projected as a back-of-the-rotation starter or possibly more, depending on that breaking pitch’s development. MLB.com ranked Tropeano 13th among Houston farmhands following the season, also noting that he needed to further refine his slider.

As for Perez, he will give the Angels a near-MLB-ready replacement to back up Iannetta. The 24-year-old Venezuelan spent the past season at the Triple-A level where he batted .259/.323/.385 with six homers. He caught 32 percent of base-stealers last season in the minors and has caught runners at a strong 33 percent clip throughout his minor league career. BA ranked him 28th among Houston prospects prior to 2013, praising his defensive skills by calling him “fluid behind the plate” while noting that he handled velocity well and had quick pop times and a strong arm.

For the Angels, this trade allows them to add MLB-ready rotation depth without sacrificing either of Howie Kendrick or David Freese, both of whom have been rumored to be on the trading block. That the Halos have added a potential rotation piece without spending is significant; GM Jerry Dipoto and owner Arte Moreno have both stated a repeated desire to remain under baseball’s $189MM luxury tax threshold, and the team already has $140MM of guarantees committed toward that gap, to say nothing of arbitration eligible players and league-minimum players to round out the roster.

As for the Astros, their focus on improving the pitching staff will be aided by Conger’s excellent framing abilities. Incumbent catcher Jason Castro is also strong in that department, though it wouldn’t be a shock him and his projected $3.9MM salary shopped in an offseason featuring a free agent market that is painfully thin on catchers. While that’s just my speculation, the Astros could likely get by with a tandem of Conger and Max Stassi behind the plate while addressing other needs by dealing Castro.