The Twins announced Friday morning that they’ve hired former big league catcher Hank Conger as their new first base coach and catching coach. This will be Conger’s first Major League coaching assignment, but it’s not his first professional coaching job. He’s spent the past two seasons as the catching coach with the Lotte Giants of the Korea Baseball Organization.

Conger, 34 in January, will make for another young addition to an increasingly youthful Twins coaching staff. Rocco Baldelli is entering his fourth season as the team’s skipper despite only turning 40 near the end of the season. The Twins also hired 41-year-old Jayce Tingler, formerly the Padres’ skipper, as their new bench coach this offseason. Newly hired David Popkins, meanwhile, turned 32 last month. He’ll serve as a co-hitting coach alongside Rudy Hernandez, who’s been on the Twins’ staff since 2015.

Conger was the No. 25 overall pick by the Angels in the 2006 draft and ranked as one of the sport’s top catching prospects prior to his MLB debut in 2010. He spent parts of the next seven seasons playing in the Majors with the Halos, Astros and Rays, batting a combined .221/.294/.360 in 1134 plate appearances. Conger graded as one of the top framing catchers in the game during his seven-year run in the Majors and was generally considered a strong receiver.

The Twins also announced that Double-A pitching coach Luis Ramirez is being promoted to the Major League staff, where he’ll serve as an assistant pitching coach, working alongside pitching coach Wes Johnson and bullpen coach Pete Maki. The 48-year-old Ramirez has been in the Twins organization for 16 seasons, serving as a minor league pitching coach and pitching coordinator.

Former Angels, Astros and Rays catcher Hank Conger will serve as the new catching coach for the Lotte Giants of the Korea Baseball Organization, per Jee-ho Yoo of South Korea’s Yonhap News Agency. It doesn’t appear that Conger has formally announced his retirement as a player, but the move to a coaching capacity puts an end to his playing days for the time being.

Conger, 32 next month, was born in Washington and went to high school in California but is of Korean descent. He played in parts of seven seasons between the Angels, Astros and Rays organizations, recording a .221/.294/.366 batting line over the life of 373 MLB games (1134 plate appearances). Conger also saw action in parts of five Triple-A campaigns but hasn’t appeared in affiliated ball since the 2017 season, which he spent with the D-backs’ Triple-A affiliate.

Conger was perhaps MLB’s premier pitch framer in 2013-14, and Yoo notes that his new team acquired 25-year-old backstop Seong-jun Ji via an offseason trade. The hope seems to be that Conger can aid in his development behind the plate as he steps into a starter’s role for the first time in his career.

The Diamondbacks have agreed to a minor league deal with catcher Hank Conger, SB Nation’s Chris Cotillo reports (Twitter links). Conger, a Wasserman client, will receive a $950K base salary if he makes the big league roster and has another $450K available via incentives.

Conger, who turned 29 last week, spent the 2016 season with the Rays but struggled through a career-worst year at the plate. In 137 plate appearances, the switch-hitter batted .194/.265/.306 with three homers and five doubles. Prior to that season, he’d posted a .233/.304/.389 batting line across three seasons with the Angels and Astros.

Conger has gone through extreme struggles in terms of preventing the running game in recent seasons (10.5 percent caught-stealing rate), but he was solid in that regard in the three preceding seasons. Beyond that, Conger routinely grades out as an above average pitch-framer.

The D-backs have overhauled their catching corps this offseason, surprisingly non-tendering Welington Castillo. Following that decision, the new D-backs front office inked Jeff Mathis to a two-year deal and Chris Iannetta to a one-year deal. Since that time, the D-backs have added both Josh Thole and Conger on minor league deals, while outfielder/catcher Chris Herrmann remains on the roster as yet another option behind the dish.

Here are the latest minor moves from around the game, all from Matt Eddy of Baseball America unless otherwise credited.  Check out Roster Resource for updated roster information for the teams cited here and every other team in the majors.

The Rays announced on Monday that they have designated catcher Hank Conger for assignment. His roster spot goes to 28-year-old lefty Justin Marks, whose contract has been selected from Triple-A Durham. The Rays also announced that they’ll recall Mikie Mahtook, Richie Shaffer and Steve Geltz as part of their latest wave of September call-ups.

Conger, 28, was acquired from the Astros this winter in exchange for cash considerations but struggled tremendously at the plate in his lone season with Tampa Bay, hitting just .194/.265/.306 in 137 plate appearances. That’s a significant departure, at least in terms of OBP and slugging, from a 2015 season that saw Conger slash .229/.311/.448 with 11 homers in 229 plate appearances for the Astros. Houston deemed Conger expendable after he developed an alarming issue in throwing out baserunners, as he halted just one of 43 attempts against him in 2015. Conger was much better in that regard this year (albeit still below average), throwing out 19 percent of potential thieves. He’s also long graded out as an above-average pitch framer behind the dish, per Baseball Prospectus.

Marks will be entering just the second big league stint of his career. He tossed two innings for the 2014 Royals but has otherwise spent the bulk of the past four seasons in Triple-A between the Royals, Rangers, A’s, D-backs and Rays. In 419 innings at that level, Marks has a lackluster 4.83 ERA, but he’s been considerably better in 2016, posting a 3.79 ERA in a career-high 145 innings. Marks has averaged 8.1 K/9 against 3.4 BB/9, and lefties have batted just .185/.253/.348 against him this season.

The Rays optioned catcher Hank Conger to Triple-A on Monday, reports the Tampa Bay Times’ Marc Topkin, who adds that either J.P. Arencibia or Luke Maile will likely replace him. Before joining the Rays via trade with the Astros in the offseason, Conger served as an excellent pitch-framing defensive option and, in both 2013 and ’15, a league-average bat over 484 plate appearances. Neither has held true this year, though, as Conger has hit an ugly .194/.265/.306 through 137 major league plate trips and earned negative pitch-framing marks. The 27-year-old also had a stretch of allowing 48 straight stolen bases dating back to last season, though he put an end to that May 1. Overall, Conger threw out 8 of 35 would-be base stealers this year prior to Monday’s demotion.

More from the AL East:

The Red Sox’ recall of Christian Vazquez from Triple-A Pawtucket brings into question Blake Swihart’s immediate role with the club, writes Evan Drellich of the Boston Herald. Vazquez is known to be an excellent defensive backstop, whereas there have been concerns with Swihart’s glove early this season. The team made veteran Ryan Hanigan available during Spring Training, he notes, but Swihart’s struggles might make it more difficult to part with a sturdy backup like Hanigan. Drellich explores the possibility of a position change for Swihart, whose bat is his best asset, although it’s not clear that the team has entertained any such notion at this time.

The deadline for teams to exchange arbitration figures with eligible players is 1pm ET today. Dozens of arb agreements figure to flow in over the next few hours, and we’ll keep track of the smaller arb agreements in this post. All projections referenced are courtesy of MLBTR contributor Matt Swartz and can be viewed on the full list of 156 players that filed for arbitration this year. Remember also that you can keep track of everyone that has avoided arbitration by checking out MLBTR’s Arbitration Tracker.

There are plenty more after the jump:

END_OF_DOCUMENT_TOKEN_TO_BE_REPLACED

The Rays have acquired catcher Hank Conger from the Astros in exchange for cash considerations, the club announced. Marc Topkin of the Tampa Bay Times first tweeted the move, adding that all of the team’s arbitration eligible players have been tendered contracts. Ken Rosenthal of FOX Sports reported earlier tonight that Conger had been offered to at least one club in a trade (Twitter link). 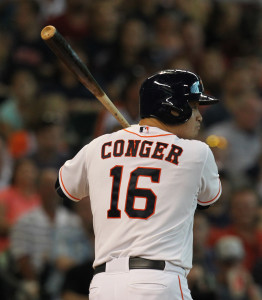 The 27-year-old Conger is a switch-hitter that is coming off a season in which he batted .229/.311/.448 with 11 home runs while backing up starting catcher Jason Castro. Conger did nearly all of his damage from the left side of the plate, hitting right-handed pitching at an outstanding .279/.353/.538 clip but slumping to a .175/.250/.351 batting line upon stepping into the right-handed batters’ box.

From a defensive standpoint, Conger is a puzzling story. He’s consistently graded out as an excellent pitch-framer — one of the primary reasons that drove the Astros (and, presumably, the Rays) to acquire him — but he developed a bizarre inability to throw out runners in 2015. While Conger has never caught attempted base-stealers at an elite rate, he prevented a staggeringly low one of 43 attempted thefts in 2015. He caught around one out of every four to five baserunners who attempted to run on him in previous seasons.

Clearly, the Astros had concerns over Conger’s throwing issues, as evidenced by the fact that he was moved for cash considerations despite a reasonably productive season at the plate, solid framing numbers and a projected $1.8MM salary. The Rays will hope that they can turn those woes around and utilize Conger behind the dish, perhaps in a platoon capacity, with Curt Casali or Rene Rivera. If they’re able to do so, the Rays can control Conger through the 2017 season. He currently has four years, 51 days of Major League service time.