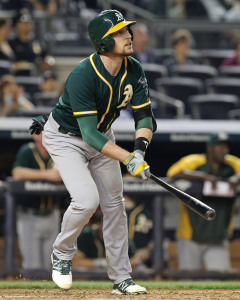 The 30-year-old Lowrie, a client of CAA Sports, will serve as Houston’s shortstop in the early stages of the contract — presumably until top prospect Carlos Correa is ready to take over the position. At that point, Lowrie could see time at third base (though the Astros also have prospects Colin Moran and Rio Ruiz rising through the system), serve as a super utility player, or potentially have appeal to other clubs in a trade.

In the meantime, the addition of Lowrie isn’t particularly good news for incumbent shortstops Jonathan Villar and Marwin Gonzalez. Villar opened the season as the team’s starting shortstop, and while he possesses game-changing speed, he didn’t hit or get on base enough to take full advantage of that excellent tool. Gonzalez is the better defender of the two internal options, so he is seemingly the more likely of the two to fill a reserve capacity for Houston now that Lowrie is on board.

With this contract, Lowrie will return to the organization with which he enjoyed a solid but injury-shortened 2012 season. After years of promise in the Red Sox organization, Houston acquired Lowrie (along with Kyle Weiland) in exchange for Mark Melancon three years ago (almost to the day). Lowrie’s original stint with the Astros lasted for just one season, as he and Fernando Rodriguez were flipped to the A’s for Chris Carter, Brad Peacock and Max Stassi the following offseason.

Lowrie enjoyed an excellent 2013 season with the A’s in which he batted .290/.344/.446 with 15 homers and a career-best 45 doubles. His bat slipped in 2014, however, as he batted just .249/.321/.355. While defensive metrics suggested that he improved at shortstop in 2014, defense has never been Lowrie’s calling card, and many clubs expressed trepidation over deploying him at short. He drew interest from clubs as a second baseman and a third baseman, but one would imagine that Houston’s promise to give him some time at shortstop, along with the fact that Lowrie resides in Houston in the offseason, gave the Astros a leg up over their competition.

With Lowrie now off the free agent market, Asdrubal Cabrera is likely the best remaining infielder available to teams with a free agent need. However, while clubs had their doubts about Lowrie’s defense, those doubts seem to be even more pronounced in Cabrera’s case.

As for the Astros, this marks the third significant free agent signing for the club in the past week, as they’ve also inked right-handed relievers Pat Neshek and Luke Gregerson, the latter of whom seems likely to be a closer for new manager A.J. Hinch. Houston could still address its starting rotation on the open market, and while they haven’t given up a draft pick with any of these signings, they showed a willingness to do so with a pursuit of David Robertson.