The Dodgers outrighted Ryan Webb today, continuing a string of strange transactions for the veteran reliever. First, he cleared outright waivers. Then the Orioles designated him for assignment. Then Baltimore shipped him to the Dodgers with catcher Brian Ward and a Competitive Balance Round B draft pick for pitcher Ben Rowen and catcher Chris O’Brien. Then, the Dodgers outrighted him today. 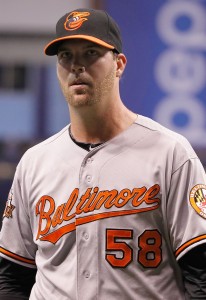 The guiding factor behind this string of moves was, it seems, Webb’s $2.75MM salary in 2015, the second season of a two-year, $4.5MM deal he signed with the Orioles. The Orioles didn’t want to pay it, and judging from the fact that they were able to outright Webb in the first place, other teams didn’t either. That, in itself, was perhaps a bit strange — Webb has never been an outstanding reliever, but he’s been relatively durable and effective in all of the past five seasons. Perhaps the lesson of the outright is that when selecting right-handed relievers, teams increasingly prefer pitchers who light up radar guns, of which there are many. Righties like Webb, who once sat in the mid-90s but whose velocity has slipped a bit in the last few years, get overlooked.

But the trade of Webb to the Dodgers was even stranger. The Dodgers were the ones receiving the big-league player, but they clearly had little interest in him and they also received what might have been the most valuable property in the trade — the draft pick. Other than Webb, the players in the deal appear to be mostly window dressing. Ward is 29 and has never been on a 40-man roster. Rowen pitched briefly for the Rangers last season, but Texas designated him for assignment and then released him in December after no one claimed him. The Dodgers signed him to a minor-league deal a month later. O’Brien will be 26 in July and has never played above Double-A.

As one might expect, the Orioles say they like the players they received. They were reportedly interested in Rowen this offseason, and it’s possible his ability to generate ground balls could one day make him a contributor, especially given the Orioles’ strong infield defense. (Webb also has ground-ball tendencies, although, of course, he had to be on the Orioles’ 40-man roster, whereas Rowen does not.) Some experts, meanwhile, believe O’Brien has a chance to stick as a backup catcher. The Orioles’ return appears, however, to be marginal, and from the Dodgers’ perspective, they didn’t give up much more than a bit of minor-league depth they didn’t really need.

Since the Dodgers have already outrighted Webb, then, the deal could quickly boil down to this: The Dodgers purchased a draft pick from the Orioles. They agreed to pay the salary of a player they didn’t need, and the Orioles gave them a pick in return. As the Los Angeles Times’ Bill Shaikin tweeted, “Moneyball with big money: Dodgers buy draft pick for $2.75MM.”

This is new. Teams have only been able to trade Competitive Balance picks for a few years, and never has there been a trade that amounted to a dollars-for-draft-pick swap the way this one seems to. Here are all the draft pick trades that have taken place since teams have been allowed to deal them.

In all draft pick trades before the Webb deal, there are convincing cases that the teams trading picks parted with those picks in large part because they got talent they liked, and not primarily to shed salary. In the Webb trade, in contrast, Webb’s salary was clearly a key component of the deal.

So does the trade make sense for the Dodgers? The pick they will receive in this year’s draft is No. 74. A 2013 study found that the net value of a pick in the No. 61-100 range was $2.58MM, very close to the prorated portion of Webb’s $2.75MM salary the Dodgers are taking on. Add in that No. 74 is closer to the top of that range and add a bit of salary inflation since then, and the value of the pick is likely high enough for the trade to make financial sense for the Dodgers, even if we assume it’s possible that Rowen and O’Brien will provide a bit of value (and if we assume the Dodgers need to think about their budget the way other teams do). The Dodgers also receive a bit of draft pool flexibility with the acquisition of the pick, which could help them lure tougher-to-sign players.

Whether MLB would want deep-pocketed teams like the Dodgers essentially buying draft picks is a different question, although for now, the effects of them doing so are fairly minimal. Teams are currently only allowed to trade Competitive Balance picks, so a draft pick can only make a small impact on a trade, since Competitive Balance picks occur after most marquee talents are off the board. If teams were allowed to trade all draft picks and a big-market team were allowed to take on a larger amount of salary for, say, a top-ten pick, there would probably be controversy.