The Athletics announced on Wednesday that they have re-acquired infielder Jed Lowrie from the division-rival Astros in exchange for minor league right-hander Brendan McCurry. 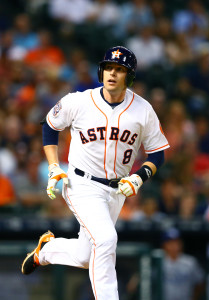 Lowrie, 32 in April, signed a three-year, $23MM contract with the Astros last offseason. He’s been with Oakland or Houston each season dating back to 2012, although the circumstances are certainly unique. The Astros acquired Lowrie in a trade with the Red Sox prior to the 2012 season, and Houston sent him to Oakland that winter in exchange for Chris Carter, Brad Peacock and Max Stassi. After a nice two years in Oakland, Lowrie signed the three-year deal with Houston last winter, but the emergence of Carlos Correa made him a bit superfluous for the Astros, thus leading to today’s trade.

In 2015, Lowrie batted .222/.312/.400 with nine home runs, playing mostly third base but also logging some time at shortstop as well. Lowrie got off to a blistering start in 2015, hitting .300/.432/.567 through April 27 before suffering a torn ligament in his right thumb that required surgery. That injury kept Lowrie out of action through July 30, and while it wasn’t reasonable to expect him to maintain his April production, the injury likely sapped his production over the final two months. Lowrie hit just .194/.265/.341 after being activated, and the immediate impact made by Correa cost him his role as the team’s everyday shortstop, hence the shift to third base. With an offseason of rest under his belt, better 2016 production could be expected from Lowrie, who can help the A’s at any of the four infield positions.

The capacity in which Lowrie will be deployed by the A’s is unclear. Marcus Semien was the team’s primary shortstop in 2015, but his 35 errors were the most in the Major Leagues by a player at any position. Danny Valencia hit well enough in 2015 (.284/.356/.530) that Oakland seems likely to want to get him regular at-bats. Third base is probably the best spot for Valencia, but the A’s also have Brett Lawrie as an option at the hot corner. Lawrie, of course, has plenty of experience at second base (thus raising the possibility of a Lawrie/Lowrie double-play tandem), but some feel that Semien may ultimately end up playing second base. Lowrie could serve as a left-handed complement to Mark Canha at first base as well, considering that Susan Slusser of the San Francisco Chronicle recently tweeted that Ike Davis is likely to be non-tendered by Oakland.

McCurry, 23, was Oakland’s 22nd-round pick in the 2014 draft and rode a strong showing in 2015 to the No. 30 rank on MLB.com’s list of top Athletics prospects. The Oklahoma State product split the year between Class-A Advanced and Double-A, compiling a 1.86 ERA with 11.7 K/9 against 2.4 BB/9. In total, McCurry has a 1.37 ERA in 91 2/3 innings as a pro (all coming out of the bullpen), although it should be noted that he hasn’t been moved through the system all that aggressively and has been more experienced than much of the competition that he’s faced. MLB.com notes that McCurry can spot a fastball that tops out at 93 mph on either side of the plate. His best pitch is a curveball, and while his upside is probably only that of a middle reliever, he has a high probability of realizing that potential due to his control and ability to succeed regardless of opponent handedness.

MLB.com’s Jane Lee was the first to report that Lowrie was headed back to the A’s (Twitter link).