5:04pm: The Braves have signed righty Jim Johnson to a one-year deal, the club announced via press release. Johnson, 32, is a client of Moye Sports Associates. 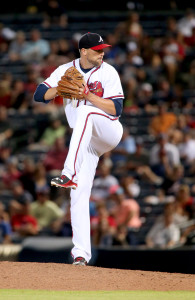 With the move, Atlanta has re-acquired one of the many players it traded away least year. Johnson was a part of the 13-player deadline swap between the Braves and Dodgers that also saw several more controllable assets change hands.

Johnson first joined the Braves on a fairly cheap, one-year deal after enduring a disastrous 2014 campaign. He bounced back nicely, tossing 48 innings of 2.25 ERA ball with 6.2 K/9 against 2.6 BB/9.

But things turned south again once Johnson reported to Los Angeles. He surrendered 21 earned runs in just 18 2/3 innings of work for the Dodgers. While he upped his strikeouts (to 8.2 K/9) and held his walk rate to under three free passes per nine, Johnson was done in by an over-.400 BABIP and 1.4 HR/9 rate in L.A.

The Braves will hope that Johnson can once again steer clear of the control problems that ruined his 2014 season while continuing to generate something close to the 58.3% groundball rate he owns for his career. Metrics tend to think his ultimate 4.46 ERA last season was somewhat unlucky. Another feather in his cap: Johnson continues to deliver about a 94 mph average fastball, and even trended up in velocity last year.

Atlanta has long been said to be targeting bullpen upgrades this winter. The team has relatively few sure things in the pen, though it received a promising campaign from Arodys Vizcaino and will eventually bring back the injured Jason Grilli. It’s not immediately clear whether the addition of Johnson means that the club will bow out of the higher-end pen market — where it’s been said to have at least done some window shopping — but Bowman adds on Twitter that “a setup man and another lefty reliever” remain on the organization’s shopping list.