The Indians announced on Thursday that they signed veteran outfielder Rajai Davis to a one-year contract.  The Relativity Sports client will reportedly be guaranteed $5.25MM plus incentives which can boost the value of the pact to $6.475MM.  Specifically, Davis will reportedly earn $175K for upon reaching 400 plate appearances and receive an additional $175K for every 25 plate appearances from that point forth, until reaching 550 PAs, where his incentives max out 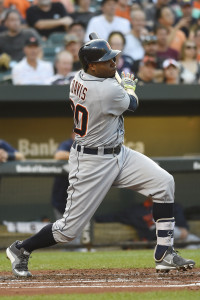 Davis, 35, has spent the past two seasons in the AL Central, appearing in 246 games and receiving 864 total plate appearances for the division-rival Tigers. With Detroit, the fleet-footed Davis batted a combined .272/.314/.418 with 16 home runs and 54 stolen bases. Over the course of his career, Davis has been a far more productive bat against left-handed pitching, posting a cumulative .296/.351/.448 triple-slash in parts of 10 Major League seasons.

From a defensive standpoint, Davis has had inconsistent marks throughout his career but is capable of manning all three outfield positions. He has at least 700 innings at all three spots, though the bulk of that time has come in left field and center field. Davis’ collective body of work in center field has received slightly above-average reviews from Ultimate Zone Rating and Defensive Runs Saved, while he’s been below average in left field. Having turned 35 in October, it’s possible he’s slowing down a bit, as last season’s 18 stolen bases were the lowest mark of his career.

Cleveland has been in need of outfield depth, particularly with Michael Brantley likely to miss the start of the season. Davis now joins an outfield depth chart that includes Collin Cowgill, Abraham Almonte, and Lonnie Chisenhall.

The Twins and Rangers were also said to have had interest in Davis before he landed in Cleveland.