4:25pm: The Nationals have agreed to a three-year deal with second baseman Daniel Murphy, ESPN’s Jim Bowden reports (via Twitter).  The deal will become official once Murphy passes a physical, as per FOX Sports’ Ken Rosenthal.  Murphy is represented by the ACES agency.

Washington’s interest in Murphy was first reported by MLB.com’s Bill Ladson last week.  The Nats have been looking for infield help for much of the winter, as they were finalists for Ben Zobrist’s services, had talks with Howie Kendrick and were on the verge of acquiring Brandon Phillips from the Reds before Phillips declined to waive his no-trade clause without a contract extension. 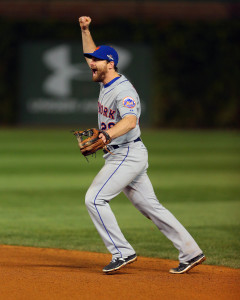 Murphy, who turns 31 on April 1, hit .281/.322/.449 with a career-best 14 homers over 538 plate appearances in 2015.  A 13th-round pick for the Mets in the 2006 draft, Murphy developed into a very solid big leaguer who has posted 12.2 fWAR/9.6 bWAR over the last five years.  Mets fans will forever remember Murphy’s contributions in the 2015 postseason, as he posted a whopping 1.462 OPS and seven home runs over 39 PA in the NLDS and NLCS, a performance that earned him the NLCS MVP Award.  Murphy became the first player in baseball history to homer in six consecutive postseason games.

In Murphy, the Nationals add a player who provides good pop for a middle infielder and also a versatile defender who play third, first and (on a limited basis) left as well as the keystone.  In fact, according to metrics like UZR/150 and Defensive Runs Saved, second base is actually Murphy’s worst defensive position.  Since Anthony Rendon can also play both second and third, it’s possible the Nats could use Murphy at the hot corner.

Regardless of who plays second, the signing ensures that Danny Espinosa will take over at shortstop until top prospect Trea Turner is ready for the big leagues.  Murphy could also spell Ryan Zimmerman at first base against the occasional right-handed starter.  In any case, Murphy’s multi-positional ability gives manager Dusty Baker a lot of flexibility in arranging lineups and late-game situations.  Perhaps most importantly, Murphy also adds a much-needed left-handed bat to Washington’s lineup — Murphy and Bryce Harper are currently the only left-handed hitters projected to play everyday roles for the Nationals.

There wasn’t too much public buzz about Murphy’s free agent market before the Nats emerged, as the Rockies, Dodgers and Mets all had some interest but in somewhat limited fashion.  MLBTR’s Tim Dierkes ranked Murphy 17th on his list of the winter’s top 50 free agents and predicted he’d land a four-year/$56MM contract.  It could be that Murphy’s market was impacted by the number of notable infielders being dealt this offseason.  The three teams noted in Dierkes’ list (the Angels, White Sox and Yankees), for example, all addressed infield needs in trades for the likes of Andrelton Simmons, Yunel Escobar, Brett Lawrie, Todd Frazier and Starlin Castro.

Since Murphy rejected a qualifying offer from the Mets, New York will receive a compensation pick between the first and second rounds of the 2016 draft.  The Nationals, in turn, will have to surrender their first-round pick (17th overall) the draft but they may end up taking only a minor slide down the draft board since they have two QO free agents of their own.  Washington already received a compensation round pick when Jordan Zimmermann signed with the Tigers and they could receive another if Ian Desmond signs elsewhere.