After days of conflicting reports, the Nationals have officially announced the signing of right-hander Shawn Kelley to a three-year contract. The Frye McCann Sports client is said to have received a $15MM total guarantee over three years, with salaries of $4MM (2016) and $5.5MM (2017 and 2018). 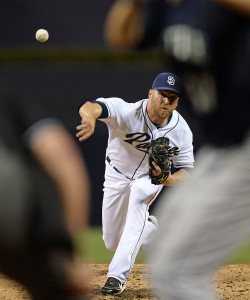 It was certainly an opportune time for Kelley to post the best of his seven Major League seasons.  Kelley has a career 3.67 ERA, 3.33 K/BB rate, 10.2 K/9 over 284 1/3 career innings.  He has only a 33% ground ball rate for his career, but he improved greatly in that category last season with a career-best 42.7% number.  He’s been effective against hitters on either side of the plate, and Kelley’s career splits indicate he’s actually been better against left-handed batters (.666 OPS) than right-handed batters (.711 OPS).

Between Kelley and left-hander Oliver Perez, Washington has now agreed to contracts with two notable relievers within the last week.  The two deals are a big step towards the bullpen overhaul many expected for the Nats this offseason.

And since the news of the Kelley signing first broke, the Nats added two more pen arms. After agreeing to terms with veteran righty Yusmeiro Petit, the club shipped Yunel Escobar to the Angels for 23-year-old flamethrower Trevor Gott. All told, the Nats’ pen will features at least four new faces, though more change could still be to come.

It remains to be seen what the Nationals will end up doing in terms of high-leverage arms. Closer Jonathan Papelbon and setup man Drew Storen are both reportedly on the trading block, but it’s not clear what direction the organization could take in terms of acquisitions with Darren O’Day headed to the Orioles and Aroldis Chapman’s status in limbo.

Reports surfaced recently that Kelley’s market was heating up, so it’s no surprise that the reliever has now landed a new contract. Kelley was rated 44th on MLBTR’s Top 50 Free Agents list, with Tim Dierkes projecting him to land a two-year, $12MM deal.

ESPN.com’s Jerry Crasnick tweeted the financial parameters of the deal, with Jeff Passan of Yahoo Sports tweeting details. Jon Heyman of CBSSports.com tweeted that the deal would go through. Jack Curry of the YES Network originally reported the signing (via Twitter) on December 8, though later reports suggested agreement was not yet finalized.