The Rockies have agreed to terms with a pair of veteran relievers on two-year contracts, the club announced. Both Jason Motte and Chad Qualls are headed to Colorado.

Motte will receive a $10MM guarantee over his two years, Ken Rosenthal of FOX Sports reports (Twitter links). That will be broken out into equal, $5MM salaries, per Joel Sherman of the New York Post (via Twitter). And Qualls will take home a $6MM overall promise from Colorado, Rosenthal adds. He’ll receive a $1MM signing bonus and then annual payouts of $1.75MM and $3.25MM, according to a tweet from Jeff Passan of Yahoo Sports. 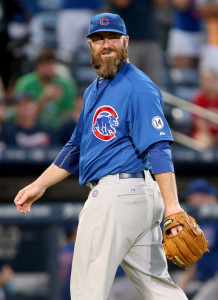 Bringing in this veteran pen package will obviously do quite a bit to bolster the back of a bullpen that was obviously in need of reinforcement. Several of the team’s most-used late-inning options — including Adam Ottavino (Tommy John), John Axford (non-tender), and LaTroy Hawkins (trade/retirement) — won’t be opening the year in Colorado.

But Motte was at least able to show last year that he is still capable of handling a significant bullpen role. And he ran his average fastball up to 95 mph — not quite what it used to be, but still a big radar reading.

Qualls is a 37-year-old right-hander who has bounced around a lot over his career, as is common for relievers who last as long as he does. He posted only a 4.38 ERA in 49 1/3 innings for the Astros last year, but did run up some impressive peripherals. Qualls racked up 8.4 K/9 against just 1.6 BB/9 to go with a 59.9% groundball rate.

That solid showing wasn’t enough to entice Houston to pick up a $3.5MM option to retain him for 2015, however. Qualls did show a fairly significant velocity drop-off last year, going from the 92 to 93 mph range down to an average 91.4 mph on his sinker. But it’s worth noting, too, that he carries sub-3.00 SIERA marks for each of the last three seasons, which he maintained in spite of the reduced pop on the gun.