10:15am: Sherman tweets that the contract is a two-year, $16MM deal. MLB.com’s Jason Beck hears the same (Twitter link). Anthony Fenech of the Detroit Free Press tweets that Pelfrey’s physical is scheduled for today.

10:08am: Joel Sherman of the New York Post hears differently (Twitter link), as he’s been told the contract is a two-year deal.

9:15am: MLive.com’s James Schmehl reports that the contract is a one-year deal that will pay Pelfrey roughly $8MM. The deal is pending a physical.

9:08am: The Tigers are in agreement on a contract with free agent right-hander Mike Pelfrey, reports Jon Heyman of CBS Sports. Pelfrey is represented by agent Scott Boras. 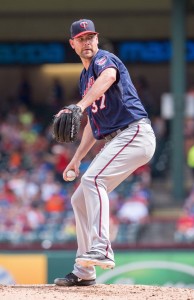 Pelfrey, 32 in January, is coming off a three-year stretch with the Twins that saw him struggle in a return from Tommy John surgery in year one, battle further arm injuries in year two but bounce back to deliver solid, if unspectacular results in his final season in Minnesota. His 2015 campaign included 164 2/3 innings of 4.26 ERA ball with 4.7 K/9, 2.5 BB/9 and a 51 percent ground-ball rate. Pelfrey’s addition figures to round out a Tigers rotation that will also include Justin Verlander, Jordan Zimmermann, Anibal Sanchez and Daniel Norris.

While Pelfrey struggled throughout most of his time in Minnesota, the 2015 season saw his average fastball velocity climb back to 93.3 mph — its fastest mark since undergoing Tommy John surgery in 2012. Pelfrey’s ground-ball rate was also the highest it’s been since his TJ operation, and if he can maintain a mark north of 50 percent, that should play well with a strong defensive double-play tandem of Jose Iglesias and Ian Kinsler behind him in Detroit. (Of course, the corner infield situation — Miguel Cabrera and Nick Castellanos — certainly leaves something to be desired, from a defensive standpoint.)

Tigers GM Al Avila recently indicated that Detroit would look to add another starter in addition to Zimmermann, who signed a five-year, $110MM contract, however a back-of-the-rotation arm was the implied likelihood. I speculated at the time that Pelfrey would fit the bill, given his 2015 results and the typically strong relationship between the Tigers and Boras.

Detroit could have elected to pursue more upside to fill out its rotation, but the team is still eyeing bullpen upgrades and already projected to have a roughly $152MM committed to just 11 players even before this signing. Pelfrey’s contract will push the payroll to about $160MM (plus another $6.5MM or so for league-minimum players), bringing the team within striking distance of last year’s record $172MM Opening Day payroll.