The Dodgers on Thursday officially acquired right-hander Bud Norris, minor league outfielder Dian Toscano, a player to be named later and cash considerations from the Braves in exchange for minor league right-hander Caleb Dirks and minor league lefty Phil Pfeifer. Norris should step right into an injury-plagued rotation that saw Clayton Kershaw hit the disabled list with a back injury earlier today. Norris last pitched on June 26, so he could start in place of Kershaw tomorrow. 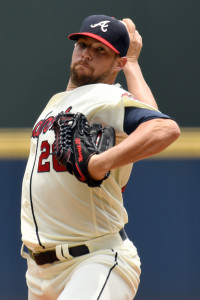 Norris, 31, began the season in the Atlanta rotation and pitched dreadfully throughout the month of April, logging an ERA just under 9.00 and losing his spot in the rotation. However, Norris made some alterations while working out of the bullpen and forced his way back into the Atlanta rotation, and he’s been a revelation since. As Fangraphs’ Jeff Sullivan recently examined, Norris ditched an ineffective changeup for a cutter that has been scintillating since its adoption, and the results have been stunning. In 29 1/3 innings since rejoining the rotation, Norris has pitched to a 2.15 ERA with a 29-to-8 K/BB ratio and an enormous 59.2 percent ground-ball rate. Overall, since losing his rotation spot in late April, Norris holds a 2.08 ERA in 47 1/3 innings.

While finances are rarely of concern for the Dodgers, they’re particularly negligible in the case of Norris, who inked a one-year, $2.5MM contract with Atlanta this offseason. Of that sum, Norris is still owed about $1.3MM through the end of the season. Toscano, meanwhile, is owed $1.3MM in 2016, $1.5MM in 2017 and $1.5MM in 2018 plus a $200K buyout of a $1.7MM option for the 2019 season. The outfielder, signed out of Cuba a couple of years ago, had already been removed from the Braves’ 40-man roster, so presumably the Dodgers have agreed to take on some of that salary in order to entice the Braves to part with Norris and the PTBNL.

The Dodgers essentially have an entire rotation on the disabled list, as Kershaw is joined there by Alex Wood, Brett Anderson, Brandon McCarthy and Hyun-jin Ryu. Norris will join healthy starters Scott Kazmir, Kenta Maeda, Julio Urias and Brock Stewart in the L.A. rotation, though that group figures to be thinned once again when Urias is shut down for a time following the All-Star break. Then again, the Dodgers’ hope is that Kershaw can return following the Midsummer Classic, so in a best-case scenario they’ll swap Kershaw out for Urias following the break.

Dirks, 23, was a 15th-round pick by the Braves back in 2014 but was traded to the Dodgers last summer for international slot money. He currently ranks 30th among their prospects in the eyes of MLB.com’s Jim Callis and Jonathan Mayo and will now return to the organization that originally selected him out of the draft. Dirks has a 1.44 ERA and a stellar 35-to-7 K/BB ratio through 31 1/3 innings out of the ’pen for the Dodgers’ Double-A affiliate in Tulsa this season. Callis and Mayo write that Dirks has a fastball with good sink that sits in the low 90s and tops out around 94 mph as well as a slider in the low 80s that grades out as an average pitch. The MLB.com duo notes that the Dodgers “love” Dirks’ competitive streak and ability to handle high leverage situations, adding that he could be a setup man in the Majors if everything clicks.

Pfeifer, also 23, was Los Angeles’ third-round pick just last season. He’s split the year between Class-A and Class-A Advanced, where he’s worked to a 2.67 ERA with 42 strikeouts against 18 walks in 30 1/3 innings out of the bullpen.

The Braves signed Toscano, now 27, out of Cuba prior to the 2015 season. Visa issues significantly delayed his arrival to the Braves’ organization even after his signing, and he was outrighted off the 40-man roster last year. Toscano was once looked at as having the upside of a fourth outfielder, but he’s batted just .226/.310/.271 in 203 plate appearances for Atlanta’s Double-A affiliate this season.