The Astros announced that they’ve signed right-hander Charlie Morton to a two-year contract. The 33-year-old Jet Sports client will receive a $14MM guarantee with up to $5MM worth of incentives, per Ken Rosenthal of FOX Sports (Twitter links). He’ll earn a $625K bonus for reaching 15, 20, 25 and 30 starts in each year of the contract. SB Nation’s Chris Cotillo adds (via Twitter) that the guaranteed portion of the deal is evenly distributed, meaning Morton will earn $7MM in 2017 and in 2018. 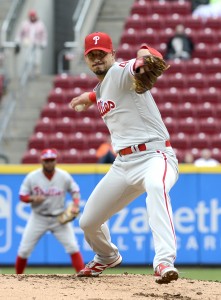 Morton has spent the bulk of his career with the Pirates but spent the 2016 season in the Phillies organization after being acquired in a trade last winter. However, Morton suffered a torn hamstring after just four starts in Philadelphia and ultimately required season-ending surgery to repair the injury, leaving him with a total of just 17 1/3 innings pitched in 2016. His contract with the Phils contained a $9.5MM mutual option, but that was bought out by the team, allowing Morton to hit the open market in search of a new deal.

When at his best, Morton is a ground-ball specialist that demonstrates solid control. He has a career 4.54 ERA in 893 Major League innings, though that mark reflects some considerable struggles he had early in his career. From 2011-15, Morton pitched to a more respectable 3.96 ERA with 6.4 K/9, 3.2 BB/9, 0.6 HR/9 and a robust 58.2 percent ground-ball rate. And when healthy in 2016, he looked to have made some intriguing gains in terms of fastball velocity, as his two-seamer jumped from an average of 91.8 mph to 93.3 mph, per PITCHf/x data. MLB.com’s Mike Petriello also notes (on Twitter) that the spin rate on Morton’s curveball ranked in the top five in all of baseball among pitchers that threw at least 50 hooks. Houston is known to be drawn to players with lofty spin rates — a trait that led them to take a chance on Collin McHugh prior to his 2014 breakout.

Morton’s penchant for grounders and strong results against right-handed opponents should play well in Houston, where right-handed bats can feast on the short porch down the left field line. In that aforementioned stretch from 2011-15, Morton held right-handed opponents to a feeble .234/.296/.336 line, though left-handed bats did knock him around at a .298/.397/.433 clip. Even against lefties, though, he’s exceptionally stingy in terms of giving up the long ball.

Durability has been an issue for Morton, who in addition to last year’s hamstring operation has had Tommy John surgery (2012) and surgery to repair a hip injury (2014). Morton has never made more than 29 starts in a season and has topped 150 innings just twice in the Majors, with 2011’s 171 2/3 frames representing a career-high. That said, with a mere $7MM annual commitment, Morton needn’t be a workhorse to justify his salary.

Morton should slot into the back of the rotation in Houston, filling the void left by the departure of fellow free agent Doug Fister. He’ll be joined there by Dallas Keuchel, who will look to rebound from a highly disappointing followup to his 2015 Cy Young campaign. Houston also has right-handers McHugh, Lance McCullers, Joe Musgrove and Mike Fiers as rotation options, giving them the depth to either move a starter in a trade or give Musgrove some additional work in Triple-A (although he certainly pitched well enough in 2016 to justify a further look at the big league level). Alternatively, the club could simply deploy Fiers, who struggled a bit in 2016, as more of a spot starter and swingman to add some length in the bullpen and serve as valuable depth to a rotation that saw both Keuchel and McCullers miss significant time due to injury this past season.

Adding Morton to a rotation that already includes Keuchel gives the Astros two of the game’s most prolific ground-ball pitchers as well as a third potential ground-ball savant in the form of McCullers (57.3 percent in 2016). McHugh, Musgrove and Fiers all profile more as fly-ball arms, though Fiers did experience a significant uptick in his ground-ball rate in his first full season with Houston last year, jumping from 37.6 percent in 2015 to a career-high 42.2 percent in 2016.