Veteran center fielder Carlos Gomez has agreed to a one-year deal with the Rangers, pending a physical, FanRag’s Jon Heyman tweets. He will receive $11.5MM, according to the New York Post’s Joel Sherman (on Twitter). Gomez is a Scott Boras client. 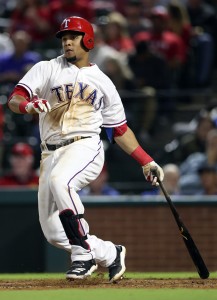 That Texas would have wanted to re-sign Gomez perhaps isn’t surprising — the Rangers, who were set to lose both Gomez and Ian Desmond to free agency this winter, were short in the outfield and had lately had talks about a variety of off-the-beaten-path outfield options, including Travis Jankowski and Matt Szczur. They’ve also shown interest in Jarrod Dyson.

Gomez gives the Rangers a more obvious solution to their hole in center field, where he’ll be flanked by Nomar Mazara and Shin-Soo Choo. After struggling with the Astros to start 2016, Gomez signed with the Rangers as a free agent at midseason and hit a terrific .284/.362/.543, looking a lot like the Carlos Gomez who played his way to the fringes of the NL MVP race with the Brewers in 2013 and 2014. While advanced metrics suggest Gomez isn’t quite the defender he once was, he’s also still very much a legitimate center fielder. MLBTR ranked Gomez 19th on its list of the top 50 free agents this winter, predicting he’d re-sign with the Rangers. (Desmond also looked like a candidate to return, but Gomez re-signing would seem to suggest Desmond will sign elsewhere, although that’s not yet certain.)

That Gomez, who’s still just 31, would receive only a one-year deal is surprising, but perhaps he’s hoping to continue rebuilding his value after his ugly performance in Houston. If he were to do so with another strong year in Texas, he could position himself for a big payday next winter. The deal is a favorable one for the Rangers, who are assuming very limited risk despite Gomez’s somewhat erratic performance history — even given Gomez’s success with the Rangers, his total line for 2016 was still just .231/.298/.384. If, for whatever reason, Gomez’s 2017 looks more like his Astros performance than his 2016 Rangers performance, the Rangers are still only out $11.5MM.

SB Nation’s Chris Cotillo wrote that Gomez and the Rangers met today (Twitter links), with Yahoo! Sports’ Jeff Passan tweeting that a deal could come together quickly. Yahoo!’s Tim Brown tweeted the length of the deal.