WEDNESDAY: The deal is now official.

2:49pm: The Pirates have agreed to a two-year, $11MM contract with free agent right-hander Daniel Hudson, reports Jeff Passan of Yahoo Sports. Hudson, a client of Jet Sports, can earn up to $1.5MM of incentives per year based on games finished and could end up being a factor for the Pirates in the ninth inning on this new contract. 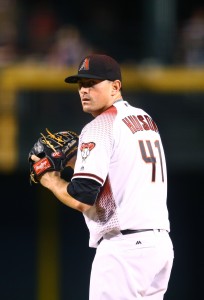 Hudson, 30 in March, posted an unsightly 5.22 ERA in 60 1/3 innings with the D-backs last season, but all of the damage done against him was confined to one dismal stretch over the summer. Hudson was sporting a 1.55 ERA as deep into the season as June 21, but he was rocked for 26 runs over his next 15 appearances (during which time he had a staggering .625 BABIP). To close out the season, Hudson allowed just four runs in 21 1/3 innings.

The Pirates are clearly banking that the dominant form with which Hudson bookended his 2016 campaign is a true representation of his talent. Since coming back from his second Tommy John surgery, Hudson has averaged about 96 mph on his fastball and looked the part of a potentially dominant late-inning presence, though his bottom-line results have yet to line up with that perception. The Pirates, though, have a history of success when it comes to turning pitchers’ careers around, and Hudson becomes the latest in a long line of arms to attempt to go that route.

While Hudson probably won’t be handed the closer’s role outright, he’ll compete with longtime setup man Tony Watson for that role. Watson stepped into the ninth inning following the trade of Mark Melancon last year and performed well, though Watson himself has been an oft-mentioned trade candidate and could be moved this winter or next summer, as he’s just a year from reaching free agency. Other late-inning options for manager Clint Hurdle include hard-throwers Felipe Rivero (acquired in the Melancon trade) and Juan Nicasio.