Several weeks after the agreement was first reported, the Rockies have formally announced the signing of veteran infielder Alexi Amarista to a one-year contract. The versatile Martin Arburua client will reportedly receive a $1.25MM guarantee, which includes a $1.1MM base salary as well as a $150K buyout of a $2.5MM option for the 2018 season. 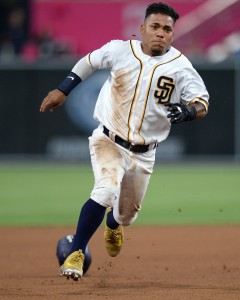 Amarista, 27, has never provided much at the plate over his six MLB seasons with the Angels and Padres, though he adds some versatile depth to the Rockies bench. The majority of Amarista’s 398 career starts have some at shortstop, but he has also seen quite a bit of action as a center fielder and second baseman. Additionally, he’s logged some time at third base and in both corner outfield slots.

The Rockies have a much-publicized glut of outfielders but relatively little infield depth beyond the quartet of first baseman Ian Desmond, second baseman DJ LeMahieu, shortstop Trevor Story and third baseman Nolan Arenado. Amarista can be a backup all across the diamond as well as late-game option off the bench and on the basepaths. New Rockies manager Bud Black knows Amarista quite well, as Black previously managed Amarista in San Diego from 2012-15.

Amarista figures to join likely fourth outfielder Gerardo Parra and backup catcher Tom Murphy to occupy three of the Rockies’ bench spots. Out-of-options infielder Cristhian Adames is a candidate to fill one of the remaining spots, as is veteran outfielder Chris Denorfia, who will be in camp as a non-roster invitee this spring (but would give the Rox a needed right-handed complement to their all-left-handed outfield). Other options for the Rockies bench are corner outfielder/first baseman Jordan Patterson and well-regarded outfield prospect Raimel Tapia, though both hit from the left side as well, which would further add to Colorado’s glut of lefty-swinging outfielders.

The Padres non-tendered Amarista back in early December following a season that saw the 27-year-old hit .257/.295/.271 over 150 plate appearances. Amarista was projected by MLBTR to earn $1.6MM in his third and final year of arbitration.

Jon Heyman of FanRag Sports first reported the agreement and the terms of the deal (Twitter links).