FEB. 9: The Blue Jays announced the signing of Howell to a one-year deal and confirmed that he’ll earn $3MM in 2017. 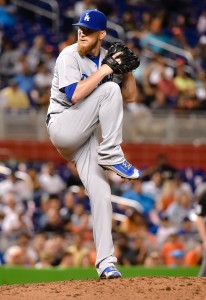 Howell, 34 in April, has spent the past four seasons as a member of the Dodgers’ bullpen, working to a collective 2.49 ERA with 8.1 K/9, 3.4 BB/9 and a hefty 58.5 percent ground-ball rate across 205 2/3 innings of relief. In that four-year stretch, left-handed opponents have been stymied by Howell, batting a collective .210/.283/.274 in 423 plate appearances. While Howell carries some degree of a platoon split, right-handers have batted a relatively unimpressive .246/.329/.351 against him over the life of that same four-year term.

Howell is coming his worst ERA (4.09) since 2011, but the rest of his stats were fairly consistent with his 2015 marks. The veteran southpaw averaged 7.8 K/9 against 2.7 BB/9 in last season’s 50 2/3 innings, and his 59.1 percent ground-ball rate was again one of the best in all of Major League Baseball (15th among pitchers with at least 50 innings thrown, per Fangraphs). Among Howell’s other most appealing traits is durability. While he did undergo surgery to repair the labrum in his left shoulder back in 2010. Howell hasn’t landed on the Major League disabled list since the 2011 season.

One somewhat concerning element of Howell’s 2016 campaign was the .302/.343/.417 batting line that he surrendered against left-handed opponents. However, that figure seems largely attributable to a .375 BABIP against lefty hitters. He still managed to strikeout out 21.4 percent of the lefties he faced in 2016, and while that number represents a slight dip from the 23.2 percent mark he tallied in 2015, Howell’s control against lefties was improved last season (3.9 percent walk rate versus 7.3 percent in 2015). Howell also saw his fastball velocity dip to an average of 85.3 mph in 2016, which could also have caused some clubs to shy away.

For the Blue Jays, left-handed relief has been a glaring area of need all offseason. Toronto watched bullpen mainstay Brett Cecil hit free agency and sign a still-surprising four-year, $30.5MM deal with the Cardinals, leaving Aaron Loup as the most experienced left-hander in manager John Gibbons’ bullpen. While much of the chatter surrounding the market for lefty relievers has centered around Jerry Blevins and Boone Logan in recent weeks, Howell more quietly remained available as an alternative with a lengthy track record of quality innings.

As it stands, he figures to join Loup as a second lefty in support of closer Roberto Osuna, veteran setup man Jason Grilli and sophomore righty Joe Biagini in Toronto. The remaining spots in the Toronto bullpen could go a number of ways, as the Blue Jays will have Bo Schultz, Ryan Tepera, Dominic Leone, Danny Barnes, Glenn Sparkman, Mike Bolsinger and Matt Dermody all in the mix for jobs. It also seems highly plausible that Toronto president Mark Shapiro and general manager Ross Atkins could continue to pursue relief help and look to add one of the many right-handers remaining on the market.