Here are the key stories from this week at MLBTR. 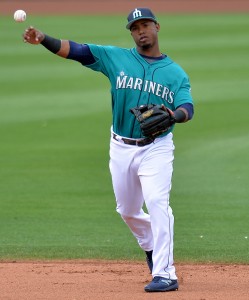 Mariners extend Jean Segura. The Mariners signed shortstop Jean Segura to a five-year, $70MM deal that includes a team option for 2023 and, for Segura, a full no-trade clause. “Over the past two seasons, Jean has been one of the premier offensive players in baseball,” said Mariners GM Jerry Dipoto of Segura, who is batting .341/.391/.462 in his first season in Seattle after arriving in a trade with Arizona over the offseason.

MLB investigating abuse accusations against Derek Norris, “looking into” abuse accusations against Addison Russell. Major League Baseball has confirmed it is investigating allegations of “physical and emotional abuse” against Rays catcher Derek Norris. The league is also “looking into” allegations of “mental and physical” abuse against Cubs shortstop Addison Russell, although there is no formal investigation at this point. Both players deny the allegations.

Cardinals designate Jhonny Peralta; Giants acquire Sam Dyson. Two teams made moves to part with key veterans this week, with one heading to the waiver wire and the other finding a new team. The struggling Cardinals designated infielder Jhonny Peralta for assignment, moving on despite Peralta’s strong contributions to their 2014 and 2015 clubs. Peralta was batting a meager .204/.259/.204 in the last season of a four-year, $53MM contract. Last week, the Rangers designated struggling former closer Sam Dyson, and this week, they found him a new home, shipping Dyson and cash for at least a portion of his 2017 salary to the Giants for a player to be named later. Dyson has a 10.80 ERA, 3.8 K/9 and 6.5 BB/9 in 16 2/3 innings this season but pitched well for the Rangers in both 2015 and 2016, accumulating 40 saves in that span.

Kevin Kiermaier to miss two months. It emerged this week that Rays defensive wizard Kevin Kiermaier will miss at least two months due to a hairline fracture in his hip. The two-time Gold Glove winner was batting .258/.329/.408 this season. In his place, the Rays will turn to Mallex Smith, who has fared well in both Triple-A and the Majors thus far in 2017.

Sean Newcomb, Francis Martes and Josh Hader reach Majors. A number of top pitching prospects received their first callups this week, or will soon. The Braves are set to promote lefty Sean Newcomb to start Saturday. The Astros promoted Francis Martes to join their bullpen, despite less-than-stellar numbers with Triple-A Fresno. The Brewers called up lefty Josh Hader to help their relief corps as well, despite his struggles with Triple-A Colorado Springs.