12:37pm: The Mariners announced on Wednesday that they’ve locked up shortstop Jean Segura on a five-year contract extension that includes a club option for the 2023 season. The deal will reportedly guarantee the CAA Sports client a total of $70MM over the next five seasons and include full no-trade protection. 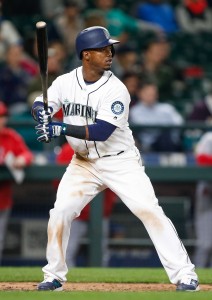 “Over the past two seasons, Jean has been one of the premier offensive players in baseball,” said GM Jerry Dipoto in a statement announcing the extension. “His combination of average, power and speed is extremely difficult to find, especially as a top-of-the-lineup hitter at a key defensive position like shortstop. We are all quite excited about having him here with the Mariners and believe he is a key ingredient in our ongoing effort to build a championship level roster.”

The 27-year-old Segura, currently on the disabled list with a minor ankle injury, entered play Wednesday pacing the American League with a .341 average. In addition to that excellent mark, he’s posted a .391 on-base percentage and slugged .462 through 198 plate appearances in his first year as a Mariner. Seattle acquired Segura from the Diamondbacks alongside Mitch Haniger and minor league lefty Zac Curtis in exchange for right-hander Taijuan Walker and infielder Ketel Marte this offseason.

Segura is already earning $6.2MM this season and, of course, would stand to earn a significant raise upon that salary via arbitration in 2018 before hitting the open market in advance of his age-29 season. With a rough assumption of a would-be $9-10MM salary via that arbitration process this winter, the Mariners secured Segura’s first four free agent seasons for a rough annual value of about $15MM.

Extensions for a player in his service class are relatively rare — especially at this point of the year — though recent examples include Salvador Perez’s five-year, $52MM deal and Brandon Crawford’s six-year, $75MM contract (as shown in MLBTR’s Extension Tracker). Segura doesn’t have the consistent track record that a number of his peers that have secured long-term deals in this service class have had.

Back in 2013, Segura had a terrific sophomore season with the Brewers, hitting .294/.329/.423 with 12 homers and 44 stolen bases through 623 plate appearances. However, that was followed up with a pair of down seasons, during which he suffered the tragic loss of his infant son. A change of scenery that sent Segura to the D-backs in exchange for Chase Anderson and prospect Isan Diaz led to a resurgence for the one-time top prospect. Segura was sensational in his lone year with the Diamondbacks, slashing .319/.368/.499 with 20 homers and 33 steals.

From a long-term perspective, the Mariners are reasonably well-equipped to handle a significant extension. Robinson Cano, Felix Hernandez and Kyle Seager are the only players under club control beyond the 2018 campaign. Segura now joins that core, and the presumptive increase in his salary that will begin with his free-agent years will coincide with the departure of Nelson Cruz, Marc Rzepczynski and Drew Smyly in free agency. The Mariners will also see Steve Cishek, Carlos Ruiz, Danny Valencia and Jarrod Dyson depart via free agency after the 2017 season. Not including the yet-unreported terms of Segura’s extension, the Mariners have committed just under $72MM to their 2019 payroll and just $43.5MM committed to the 2020 payroll.

Jon Morosi of MLB Network and FOX Sports first reported the two sides were close to a deal (Twitter link). Hector Gomez of Z 101 in Santo Domingo tweeted the agreement and the terms of the deal. FanRag’s Jon Heyman reported that Segura would receive a full no-trade clause (Twitter link).