The Rockies have officially struck a deal to acquire Rangers catcher Jonathan Lucroy, as Ken Rosenthal of MLB Network first reported (via Twitter). A player to be named later is going to Texas in return, per ESPN.com’s Jerry Crasnick (via Twitter). (Note: the PTBNL cannot be a 2017 draft pick.)

Lucroy, 31, was connected to the Rockies earlier today. The veteran receiver will help bolster a catching situation that has been less-than-ideal all year long. While Tom Murphy was expected to play a major role, he missed an extended stretch due to injury and was optioned after struggling upon his return. Tony Wolters has been over-extended as a regular, and neither Ryan Hanigan nor Dustin Garneau has shown much during their time in the majors this year. 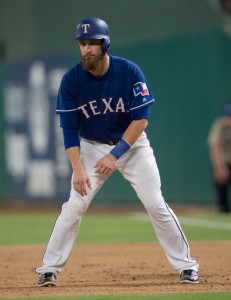 Colorado will hope that Lucroy provides a steadying presence, both in the field and at the plate. He’s earning just $5.25MM on the year — just over $1.8MM of which remains — before reaching the open market at season’s end, so his acquisition won’t make a major dent in the club’s payroll.

But for this move to succeed, Lucroy will need to engineer a turnaround. Through his 306 plate appearances this year, the veteran is hitting just .242/.297/.338 with four home runs. And the questions aren’t limited to the offensive side of the equation. Once the poster boy for pitch framing, Lucroy has rated as perhaps the worst framer in baseball in 2017.

That output falls far shy of his typical work. From the start of his breakout 2012 season through the end of the 2016 campaign, Lucroy ran up a .291/.353/.465 slash line — numbers more commonly seen from quality corner outfielders than backstops. He also developed a reputation as a top-tier defensive catcher, driven especially by his outstanding abilities in the then-underappreciated art of pitch framing.

Whether the veteran can bounce back will surely be interesting to see. He has struck out in just 10.5% of his plate appearances this year, though he’s also walking at a lesser rate (6.2%) than usual. He has surely been a bit unfortunate with a .259 BABIP, though that hardly explains the massive power drop-off (from a career .153 isolated slugging to a current .096 mark). And it is concerning that Lucroy is making far less hard contact (22.3%) and putting the ball on the ground far more (56.2%) than he has typically. With respect to the framing downturn, it’s anyone’s guess whether he can return to his prior levels, though perhaps there’s reason to think that Lucroy will excel regardless in the-less quantifiable aspects of his craft behind the dish.

For the Rangers, meanwhile, the move perhaps begins what could be quite a busy stretch. The club has been rumored to be preparing to move star righty Yu Darvish, and will surely be listening to offers on a variety of other players. Relievers Keone Kela and Jeremy Jeffress are said to be available, while pending free agent hitters Carlos Gomez and Mike Napoli likely are as well.

It’s disappointing, surely, for the Rangers to be overseeing a sell-off in the midst of a season that started with lofty expectations. But the club is also undoubtedly right not to double down on a roster that had too many questions. That said, with numerous core pieces under contract for the foreseeable future, the expectation remains that the Rangers will be focused on moving pending free agents while reloading for another run in 2018.