The Cardinals will promote right-hander Jack Flaherty from Triple-A Memphis to make his MLB debut by starting Friday’s game against the Giants, per a team announcement. He’s not on the 40-man roster, but this morning’s unexpected trade of Mike Leake to the Mariners opened both a 40-man roster spot as well as a spot in the St. Louis rotation. 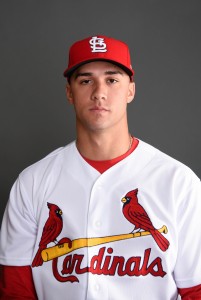 Flaherty, 21, was the 34th overall pick in the 2014 draft and ranked as the game’s No. 53 prospect on MLB.com’s midseason top 100 list. Both Baseball America and Fangraphs rated Flaherty comparably, at No. 57, on their own summer rankings of baseball’s top 100 prospects.

Jim Callis and Jonathan Mayo of MLB.com note in their free scouting report that Flaherty’s velocity has ticked up to the mid-90s this year, adding that he has three “usable” secondary offerings, with his changeup the best of the bunch as a potential plus pitch down the line. Fangraphs’ Eric Longenhagen calls him a potential above-average starter, offering a similar take on his improved arsenal in 2017.

The 6’4″, 205-pound Flaherty is a product of Harvard-Westlake High School in Los Angeles — the same program that produced top picks Lucas Giolito and Max Fried. Flaherty opened the 2017 season at Double-A and dominated Texas League opponents to the tune of a 1.42 ERA through 63 1/3 innings before being bumped up to Memphis. His results in the Triple-A International League were similarly impressive, as Flaherty has logged a 2.94 ERA with 9.0 K/9, 2.5 BB/9 and a 41 percent ground-ball rate through 85 1/3 frames there.

The Cardinals’ clear hope is the Flaherty, Luke Weaver and currently injured but high-ceilinged Alex Reyes can occupy spots in their rotation for years to come. Flaherty is the last of the bunch to arrive in the Majors, and if he’s here to stay, he won’t qualify for arbitration until after the 2020 season. The earliest that Flaherty could become a free agent, given his current trajectory, would be upon completion of the 2023 campaign.