Recapping the top stories from the past week at MLBTR:

Juan Nicasio on the move again: Nicasio went from the Phillies to the Cardinals in a rare September trade, thus continuing a peculiar week-plus for the right-hander. After they couldn’t put together a trade for him via revocable waivers, the Pirates placed Nicasio on outright waivers Aug. 29 in a cost-cutting move, leading the out-of-contention Phillies to claim him on the final day of the month. The Phillies then flipped him to playoff-contending St. Louis this past Wednesday for a quality prospect, infielder Eliezer Alvarez, whom MLB.com ranked 19th among the Redbirds’ farmhands prior to the trade. As an impending free agent, Nicasio might only be a Cardinal for a few weeks. Even if the Cards overcome a four-game NL Central deficit or a three-game disadvantage in the wild-card race, Nicasio won’t be able to pitch in the postseason because they acquired him after the Aug. 31 waiver trade deadline. Nicasio did his part to help the Cardinals play into October in his first appearance, though, as he picked up a four-out save Friday against a familiar team – the Pirates. 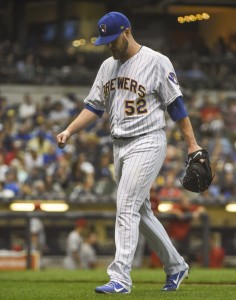 Brewers lose their ace: The Brewers’ already low playoff odds took a hit Saturday when they announced that Jimmy Nelson will miss the rest of the season with a right rotator cuff strain and a partial anterior labrum tear. All the more frustrating for Milwaukee and Nelson is that he suffered the injury while running the bases. The breakout star, 28, was in the middle of another excellent start at the time, one that saw him shut out the NL Central-leading Cubs for five innings in a 2-0 victory.

Pirates retain their brain trust: The Bucs on Tuesday announced extensions for Neal Huntington, the general manager who cut Nicasio, and skipper Clint Hurdle through 2021. While the Pirates are on track to finish under .500 for the second straight season, the seven-year Huntington-Hurdle partnership has mostly yielded positive results. Pittsburgh made the playoffs each season from 2013-15, with the first of those berths ending a 21-year drought for the franchise. Further, as Baseball America’s Ben Badler tweeted this week, the low-payroll club has won the fifth-most games in the majors over the past half-decade.

Potential stars debut: The Nationals, Dodgers and Phillies each called up a top 100 prospect this week. Washington controls the highest-ranked member of the trio, 20-year-old outfielder Victor Robles, who divided this season between the High-A and Double-A levels before the soon-to-be NL East champions selected his contract Thursday. He has collected one plate appearance since his promotion, while the Dodgers’ Walker Buehler and the Phillies’ J.P. Crawford have also seen action. One of baseball’s elite pitching prospects, the 23-year-old Buehler threw two scoreless innings in relief against the Rockies on Thursday. Crawford, a 22-year-old shortstop, is off to a slow start through a meager 16 PAs.

More misfortune for David Wright: The longtime Mets captain and third baseman suffered yet another setback in his rehab and will need rotator cuff surgery. Wright, who previously went under the knife to repair a herniated disk in his neck, won’t play this year after combining to appear in only 75 games from 2015-16. His most recent big league showing came May 1 of last year. With $47MM still owed to him through 2020, the 34-year-old isn’t considering retirement.