The Twins announced Monday that they have signed manager Paul Molitor to a three-year contract extension that will keep him with the team through the 2020 season. Molitor’s new deal is worth approximately $4MM, Bob Nightengale of USA Today reports (on Twitter). He and the Twins are still discussing whether there will be changes to his coaching staff, according to Jon Heyman of FanRag (Twitter link). 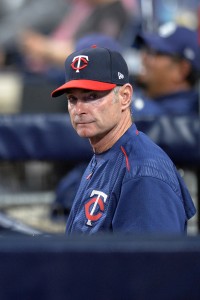 While a new deal for Molitor was expected by many, it wasn’t quite a given. Molitor was initially hired as the successor to longtime manager Ron Gardenhire, but that hire was made by former general manager Terry Ryan, who was fired from his post last year. Some speculated that Falvey and general manager Thad Levine may want to bring in their own candidate to take over the dugout, but Molitor will stay in the fold.

While the 2016 season was an unmitigated disaster, the Twins have surprised in two of Molitor’s three seasons at the helm. The 2015 club won 83 games — a 13-game improvement over the preceding season — and was in contention for an AL Wild Card spot until the very last weekend of the regular season. Last year’s 103-loss campaign now looks to be largely an aberration, as Molitor’s Twins posted 85 wins and secured the second AL Wild Card spot this year before falling 8-4 against the Yankees. That surprising performance has positioned Molitor as one of the speculative front-runners for American League Manager of the Year honors.

Molitor, of course, enjoyed a 21-year playing career and is among the most decorated offensive players in Major League history. The seven-time All-Star and four-time Silver Slugger winner finished his career with a .306/.369/.448 batting line, and his 3,319 career hits rank 10th all-time in MLB history. Molitor is widely praised by his former teammates and current players for his baseball intelligence, and while he may not be as sabermetrically inclined as some other skippers around the game, his arrival in Minnesota did prompt a much more aggressive implementation of defensive shifting.

Overall, he’s managed the Twins to a 227-259 record in his three-year tenure, though the future looks considerably brighter in Minnesota following explosive second halves from young talents such as Byron Buxton, Jorge Polanco and Eddie Rosario. Those three will join a hopefully healthier Miguel Sano, outfielder Max Kepler and right-hander Jose Berrios in forming a long-term core that the Twins hope can lead to additional postseason appearances in the very near future.

Charley Walters of the St. Paul Pioneer Press first reported (via Twitter) that Molitor would return to manage the Twins under a new contract. Mike Berardino of the Pioneer Press reported Sunday (Twitter link) that the two sides were closing in on a deal. La Velle E. Neal III of the Star Tribune confirmed the agreement Monday. Photo courtesy of USA Today Sports Images.