TODAY: The Cubs have officially announced the signing.

SUNDAY: The Cubs have reportedly agreed to a contract with free agent reliever Brandon Morrow, pending physical. Morrow, a Wasserman client, will be guaranteed two years and $21MM if the contract is finalized. He’ll earn $9MM apiece in each season along with a $3MM buyout or a $12MM vesting option for the 2020 season.

Chicago had a clear need in the late-inning mix, as the team has cut ties with Hector Rondon and has not (at least to this point) re-signed any of Wade Davis, Brian Duensing or Koji Uehara. Those four were among the relievers Chicago relied on the most last season, leaving the club in clear need of bullpen help to complement top holdovers Carl Edwards Jr., Pedro Strop, Mike Montgomery and Justin Wilson. Consequently, in addition to Morrow, the Cubs are likely to acquire one other late-inning reliever, per Ken Rosenthal of The Athletic (Twitter link). 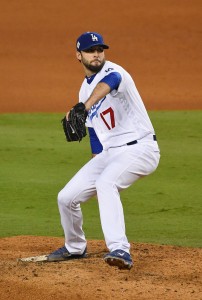 The 33-year-old Morrow will provide a significant boost to the Cubs’ relief corps if last season is any indication. In his first full campaign as a reliever, the former Mariners, Blue Jays and Padres starter put past shoulder issues behind him to toss 43 2/3 innings with the National League-winning Dodgers and pitch to a 2.06 ERA, also notching 10.31 K/9 against 1.85 BB/9 and a 45 percent groundball rate. Moreover, the right-hander finished third among relievers with 40-plus innings in infield fly rate (20.6 percent) and 18th in swinging-strike percentage (16.0).

Statistically, the hard-throwing Morrow wasn’t quite as successful during the Dodgers’ run to the World Series as he was in the regular season, yielding six earned runs in 13 2/3 innings, but four of those came in one disastrous appearance in Game 5 of the Fall Classic. He was highly effective otherwise – including when he held the Cubs scoreless over 4 2/3, one-hit, seven-strikeout innings in the National League Championship Series – and became the second hurler in major league history to pitch all seven games of the World Series.

Morrow’s workload in last season’s playoffs, in which the Dodgers deployed him in an eye-popping 14 of 15 games, and injury history stand out as obvious concerns, but his 2017 dominance nonetheless has him in position to secure a lucrative contract. That’s quite a change from a year ago when Morrow had to settle for a minor league pact in late January.