The Diamondbacks have dipped into the Japanese market in an effort to bolster their bullpen, announcing on Friday a two-year contract with right-handed reliever Yoshihisa Hirano. The deal will reportedly guarantee Hirano $6MM in total — $3MM annually plus another $1MM worth of available incentives each season. Left-hander Henry Owens was placed on outright waivers to clear room for Hirano, and he’s already been claimed by the division-rival Dodgers. 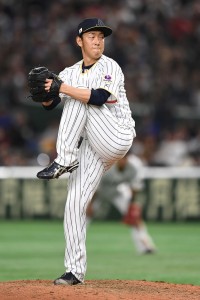 Hirano, 34 in March, has long been a dominant closer in Japan, amassing 143 saves with a 2.62 ERA, 9.4 K/9 and 2.4 BB/9 through 271 1/3 innings for the Orix Buffaloes from 2013-17. Because of his age and his professional experience in Nippon Professional Baseball, Hirano is exempt from both international bonus pools and the NPB/MLB posting system.

The D-backs weren’t prominently linked to Hirano prior to the agreement, though he’d reportedly drawn interest from multiple MLB clubs, including the Dodgers, Tigers and Cardinals. Jim Allen of the Kyodo News tweets that in speaking to big league scouts at the Winter Meetings, there was a consensus that while Hirano’s velocity is down from its peak earlier in his career, his splitter will still play in the Majors. Meanwhile, the Arizona Repbulic’s Nick Piecoro tweets that scouts to whom he’s spoken peg Hirano’s velocity in the 90-94 mph range and also credit him with a plus splitter and good deception in his delivery.

Fernando Rodney, who served as Arizona’s closer throughout the 2017 season, recently signed with the Twins, subtracting one late-inning arm from what was, on the whole, a generally successful group in 2017. Arizona also bid farewell to veteran lefty Jorge De La Rosa and righty J.J. Hoover this offseason, who soaked up a combined 92 2/3 innings out of the ’pen — further creating a a need to add some innings to the back of the relief corps.

While it’s a stretch to assume that Hirano will simply be handed the closer’s role in Arizona right out of the gate, there’s no clear-cut ninth-inning presence for the Diamondbacks at present. Hirano will likely compete with Archie Bradley and others for that distinction this spring, and it’s not out of the question that he could find himself in save opportunities later in the year, even if he doesn’t win the job out of camp.

The D-backs are already headed for a record payroll in 2018, though Hirano’s contract will only modestly bump the current $126MM projection ever so slightly north. That said, it doesn’t seem especially likely that they’ll be particularly aggressive spenders on the free-agent market between now and Opening Day.

While they’re fresh off an NLDS appearance and are entering into the first season of a new television contract said to be worth more than one billion dollars, the D-backs aren’t merely setting a new record payroll — they’re shattering their previous high point. Arizona is on track for a near-$30MM payroll increase over its 2017 Opening Day mark and an increase of roughly $17MM over its previous franchise high. Arizona has only opened a season with a payroll north of $100MM once in its history (2014) and has averaged a $93MM Opening Day payroll over the past three seasons.

Jim Allen of the Kyodo News first suggested that Hirano could be headed to the D-backs (Twitter link). Nick Piecoro of the Arizona Republic reported there was an agreement in place and provided financial details (Twitter links). USA Today’s Bob Nightengale tweeted that he’d get a multi-year deal and added the annual breakdown as well.