DECEMBER 20: The Phillies have announced the deal. Sanchez has the full breakdown (via Twitter): Santana receives a $10MM signing bonus, with annual salaries of $15MM, $17MM, and $17.5MM. The math would suggest that there’s a $500K buyout on the option year.

DECEMBER 15, 1:28pm: Santana’s contract is still pending a physical, tweets Jim Salisbury of NBC Sports Philadelphia. Salisbury also tweets that Hoskins will indeed play a significant amount of left field, freeing up the possibility of the trade of an outfielder. Aaron Altherr and Nick Williams had been slotted in as the Phillies’ corner outfielders, with Odubel Herrera lined up as the center fielder.

12:32pm: In a surprising move, the Phillies have agreed to a deal with first baseman Carlos Santana, reports FanRag’s Jon Heyman (Twitter links). It’s a hefty three-year, $60MM contract, according to Heyman. Santana is represented by Octagon. 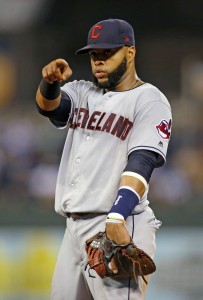 Philadelphia has been linked to Santana on multiple occasions, though it’s long seemed like a curious fit given the emergence of Rhys Hoskins as the presumptive starter at first base. However, the Phils deployed Hoskins in left field last season, and he turned in passable results in a small sample of 237 innings there (-1 Defensive Runs Saved, scratch defense per Ultimate Zone Rating).

The Phillies could opt to continue utilizing Hoskins in the outfield in order to get Santana’s bat into the lineup. Santana does have 225 innings of experience at third base, though he received poor defensive ratings there, and his superlative glovework at first base is a significant component in his value. Santana, of course, broke into the Majors as a catcher but hasn’t suited up behind the dish since the 2014 season and hasn’t played more than 100 innings there since 2013, owing in part due to concussion issues.

Santana jumps out as the most significant position player to come off the board and does so in impressive fashion, matching the dollars that his now-former teammate, Edwin Encarnacion, received with the Indians just one offseason ago. Santana landed a considerably stronger average annual value than many pundits predicted — MLBTR pegged him at three years and $45MM in total on our Top 50 free agent list — though the Phillies likely had to pay a premium to convince a top-tier free agent to sign with a club that has spent the past several seasons rebuilding.

Overall, the switch-hitting Santana has turned in a .363 OBP in nearly 4600 plate appearances since establishing himself as a Major League regular back in 2011, averaging 153 games played and 24 homers per season along the way. One would think that a move to a much more hitter-friendly environment, Philadelphia’s Citizens Bank Park, should help to improve his power output as well (though his .196 ISO in that time is already plenty strong).

Because Santana rejected a one-year, $17.4MM qualifying offer from the Indians, he comes with draft compensation in the form of the Phillies’ second-highest draft pick — in this case, their second-round pick — and a $500K hit to their 2018-19 international bonus pool. The Phils will lose not only that second-round pick, but also the slot money that would’ve come along with it, thus noticeably shrinking next year’s draft pool.

The Indians, meanwhile, will secure a compensatory pick between the end of the first round and the start of Competitive Balance Round A due to the fact that Santana’s contract exceeded $50MM in total guarantees.