The Rockies have officially agreed to bring back free agent lefty Jake McGee with a three-year deal that guarantees $27MM. McGee is represented by Wasserman.

McGee’s guarantee comes in the form of consecutive salaries of $7MM, $8.5MM, and $9.5MM. He’s then promised a $2MM buyout on a 2021 vesting/club option that’s priced at $9MM. The extra year vests if McGee appears in sixty games in 2020, finishes forty games in that year, or makes 110 total appearances over the 2019-20 campaigns. There’s also a health requirement for the option to vest, though details remain unclear. It seems the contract also contemplates incentives of up to $4MM annually; while the milestones aren’t known, that leaves some earning upside in McGee’s pocket. 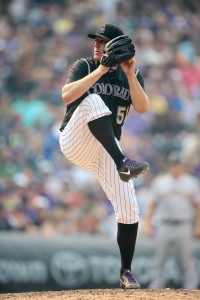 It’s not surprising to see a multi-year deal with a strong guarantee based both on McGee’s quality efforts in 2017 and an aggressive market for relievers thus far. McGee will become the latest in a line of high-quality relievers to come off the board and joins right-hander Bryan Shaw at the back of the Colorado bullpen nw that their deals are finalized.

The 31-year-old McGee struggled in his initial season with the Rockies (2016) after coming over from the Rays in the Corey Dickerson swap, but he largely righted the ship with a solid 2017 season. In 57 1/3 innings, the hard-throwing McGee posted a respectable 3.61 ERA with 9.1 K/9 against 2.5 BB/9 and a 40.5 percent ground-ball rate.

McGee’s 37 percent hard-contact rate is certainly higher than one would like to see, though it’s worth pointing out that much of that hard contact came on grounders; Statcast indicates that McGee’s average exit velocity on balls in the air was among the lowest in baseball (as is borne out in his 0.63 HR/9 rate), but he ranked considerably higher in terms of exit velocity on grounders.

It’s been an up-and-down ride for McGee both in terms of health and bottom-line results since he established himself as a big league regular back in 2012. But the overall body of work is impressive, as he’s logged a combined 3.06 ERA with 10.4 K/9 against 2.4 BB/9 in 329 2/3 innings over that six-year span.

At present, it’s not clear how the Rockies view the back of their bullpen taking shape. McGee has served as a closer in the past and could be asked to take the ball in the ninth inning most often for the Rox in 2018 and beyond. Shaw, who also has agreed to a three-year deal, is no stranger to high-leverage innings himself, having served as an eighth-inning setup man in Cleveland for several years.

Colorado GM Jeff Bridich and his staff may not yet be done adding to the bullpen, either. The Rockies have been linked to Zach Britton, Wade Davis and Greg Holland over the past few weeks, and while they’ve certainly spent aggressively to bring McGee and Shaw into the fold, they’re still somewhere in the vicinity of the payroll mark at which they opened the 2017 campaign. If ownership is willing to spend a bit more with a playoff berth in the rear-view mirror, the Rox could yet make further additions to the ’pen or elsewhere on the roster.

Joel Sherman of the New York Post reported the signing (via Twitter). Ken Rosenthal of The Athletic had tweeted that rivals anticipated the move. SB Nation’s Chris Cotillo (Twitter links) and Jon Heyman of Fan Rag (links to Twitter) had contract details.