Josh Donaldson enters his third year of arbitration with an already extraordinarily high $17MM salary. This would already be the highest ever one-year deal signed in arbitration (with the exception of Bryce Harper’s 2018 salary, inked back in May) and Donaldson will certainly command a raise above that. The highest one-year deal ever signed went to Prince Fielder in 2011 at $15.5MM. However, Buster Posey and Ryan Howard earned $20MM during years generally covered by arbitration as part of multi-year deals inked earlier in their careers. 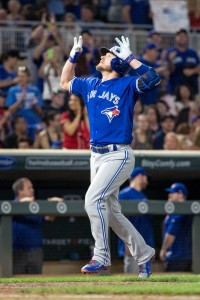 Generally, players who are beyond their first year of arbitration are effectively given raises, rather than absolute salaries, and my research has determined that these raises are almost exclusively based on their platform season. That is how my model is set up. In other words, Donaldson is projected to earn $20.7MM because the model projects a $3.7MM raise for a player with his 2017 performance.

However, Donaldson received a two-year deal covering 2016-17, making his case somewhat tricky. We sometimes see players in such circumstances being paid as a “re-slot” case, which means they are slotted back into the arbitration system based on career performance. So it is possible that Donaldson’s performance prior to 2017 will be considered. However, that would probably push his salary even further above the current record and seems unlikely.

Like many others in the league this season, Donaldson could see his case impacted by the record level of home runs that were hit in Major League Baseball in 2017. Big league hitters combined for a total of 6,105 total home runs — a whopping 26 percent increase over the average from the past five seasons. When I look at players with similar home run totals in that span, it isn’t clear if an arbitration panel (or teams and agents that are negotiating in the shadow of what an arbitration panel would say) would treat home runs from Donaldson as similar to other players with the same number as home runs, or as someone with maybe 26 percent fewer home runs.

Donaldson hit 33 home runs but did so only in 496 plate appearances, and that total was only accompanied 78 RBIs. If we re-adjust his home run baseline to the average of the last five years, that would put us at 26.  If we allow for the possibility that a potential panel might consider his home run total to be inflated, we might want to look for other players who hit 25 home runs. But playing time is a huge factor in arbitration, so we would want to look for players who did not play full seasons.

All five of these players had batting averages between .196 and .244, so Donaldson at .270 is far above them. They also all hit between 25 and 27 home runs, which means Donaldson’s mark total of 33 will probably place him above that group as well. Valbuena and Saltamacchia are poor comparables because their averages were in the .220s and both had fewer than 60 RBIs. Davis, who hit .196, is probably also low. So we would rather compare Donaldson to Duda (.244/27/73) or Moss (.234/25/81). But it is clear that these are both probably floors, since Donaldson bests them on all major fronts considered in arbitration. That leads me to believe that Donaldson should definitely get a raise above $2.5MM.

If we relax the playing time assumption, we could arrive at Todd Frazier in 2017. He hit .225/40/98 in 666 PAs, so while his batting average was low, the more-important home run and plate appearance totals put him as a clear favorite. He received a $3.75MM raise last year, so that seems like a plausible ceiling for Donaldson.

All of the players listed here were actually reaching arbitration for only their third year of eligibility and Donaldson is actually entering his fourth year of eligibility (his first year was 2015, before his two-year pact for 2016-17). If we want to strictly adhere to finding a fourth time eligible, we could see Eric Hosmer last year at .266/25/104 in 667 PAs. He got a $4MM raise and could potentially be a good comparable as well.

I think the model is pretty close to accurate for Donaldson in this case. I could see an argument for a raise in the low 3’s rather than the high 3’s, putting him between $20MM and $20.5MM instead of $20.7MM, but I do not think he will go lower than that.