11:50am: The Brewers and free agent righty Matt Albers have reached an agreement on a two-year deal, reports Ken Rosenthal of The Athletic (Twitter link). Albers, a client of SSG Baseball, will be guaranteed $5MM on the contract and can earn another $1MM each year based on total appearances, according to Sportsnet’s Ben Nicholson-Smith (Twitter link). The deal is pending a physical. 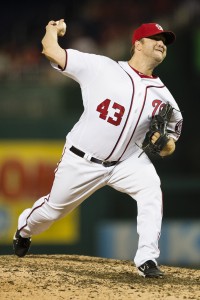 There are, it should be noted, some indications that Albers had his share of good fortune in 2017, as well, though. His 8.7 percent swinging-strike rate was below the league average and not what one would expect from a pitcher that whiffed better than a batter per inning — a feat he’d achieved in only one season prior to 2017 (with the Red Sox way back in 2011). Albers also benefited from a minuscule .203 BABIP, though while that mark is in for some regression, the extent of said regression may not be as great as one might think at first glance.

Albers posted a hefty 15.9 percent infield-fly rate in 2017, and his batted-ball profile was among the most encouraging of any reliever in the game. Albers allowed a measly 22.8 percent hard-hit rate against him, which was the third-lowest mark in MLB among qualified relievers. He also induced 30.9 soft-contact rate, which was good for the fourth-best in the bigs.

Since establishing himself as a regular big league reliever back in 2009, Albers has been a rather durable asset, appearing in 55+ games in seven of those nine seasons. He was limited to 37 1/3 innings in 2015, though that year was truncated by a broken finger rather than any sort of arm injury. Shoulder trouble kept him out of action for all but 10 innings of the 2014 season, but that’s been the only instance of a notable arm injury keeping him on the shelf for a prolonged period in nearly a decade’s time.

Albers won’t factor into the closing mix in Milwaukee, where Corey Knebel is fresh off a breakout season in which he stepped into the spotlight as one of the game’s top strikeout artists. However, the veteran Albers will join lefty Boone Logan as a newly signed addition to manager Craig Counsell’s relief corps, where he’ll pair with Jacob Barnes, Jeremy Jeffress and Josh Hader to help bridge the gap from the team’s rotation to Knebel at the end of the game.

It’s been an aggressive week for Milwaukee, of course, as GM David Stearns and his staff have also signed Lorenzo Cain and pulled off a blockbuster to acquire Christian Yelich within the past four days alone. Brewers owner Mark Attanasio gave signals over the weekend, too, that the Brew Crew still has the payroll capacity to add a top starting pitcher if Stearns & Co. feel the right deal presents itself.