5:25pm: The D-backs have now announced the signing.

3:45pm: Rosenthal tweets that Avila has already passed his physical, making the deal official. The D-backs have yet to announce the signing, though, which will require a corresponding 40-man roster move.

Jan. 31, 1:19pm: Avila will receive a two-year contract worth $8.25MM, The Athletic’s Ken Rosenthal reports (via Twitter).  Another $250K per season will be available to Avila in incentives, according to Heyman.

6:36pm: The Diamondbacks are nearing an agreement with free agent catcher Alex Avila, Nick Piecoro of the Arizona Republic reports on Twitter. Terms are unknown, but MLBTR predicted a two-year, $16MM contract for Avila at the outset of free agency.

The 31-year-old Avila will add an offensively capable backstop to an Arizona club whose catchers batted a paltry .219/.306/.404 last season. That was with a very good performance from Chris Iannetta, who joined the NL West rival Rockies in free agency, leaving the Diamondbacks with Jeff Mathis and Chris Herrmann as their top options. Mathis, the team’s likely starter prior to the Avila agreement, is known for his defensive prowess. However, his bat has never come close to keeping up with his work behind the plate.

Unlike Mathis, defense is not Avila’s calling card – in fact, he was among the game’s worst pitch framers in 2017, according to both Baseball Prospectus and StatCorner. But the lefty-swinger did his best to make up for it at the plate, where he slashed an outstanding .264/.387/.447 with 14 home runs and a .183 ISO in 376 plate appearances divided between the Tigers and Cubs. Avila’s numbers dropped off after the Cubs acquired him prior to the July 31 non-waiver trade deadline (.274/.394/.475 versus .239/.369/.380), though he still offered the North Siders above-average offensive production relative to his position. 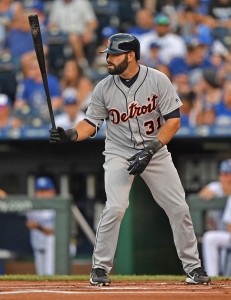 While Avila managed a hard-to-sustain .382 batting average on balls in play last season and struck out in 31.9 percent of PAs, he helped his cause significantly with scorching contact. Among those with at least 300 PAs, Avila ranked second in the majors in hard-hit rate (48.7 percent, compared to a career mark of 36.6). And out of 387 hitters who put at least 100 balls in play, he finished tied for 18th in average exit velocity (90.4 mph) and tied for 21st in barrels per PA (7.4). Consequently, he posted a tremendous xwOBA (.395) that easily outpaced his still-high wOBA (.368).

Last year’s offensive outburst was Avila’s most impressive showing since 2011, when the then-Tiger earned his lone All-Star nod, but success with the bat isn’t anything new for the lifetime .243/.351/.401 hitter. He comes with notable platoon splits, though, having held his own against right-handed pitching (.250/.362/.426) while failing to present a threat versus southpaws (.212/.306/.305) since debuting in 2009. He also brings durability concerns, having gone on the disabled list several times in his career, including twice during a 57-game season with the White Sox in 2016.

After his lone campaign with the ChiSox, Avila returned to the Tigers last winter for a $2MM guarantee. Avila’s sure to do better this time around, but it’ll be interesting to see how much the Diamondbacks will guarantee him. With an estimated $122MM-plus in commitments at the moment, the D-backs are known to have limited payroll flexibility, which is seemingly standing in the way of a reunion with free agent slugger J.D. Martinez – Avila’s former teammate in Detroit – and may lead to cost-cutting trades (they could deal $7.5MM left-hander Patrick Corbin, for instance). The club has only opened a season beyond the $100MM mark twice, including when it spent a franchise-record $112MM-plus in 2014.