11:15:am: The Astros have announced the signing.

8:48am: The Astros have agreed to a two-year, $24MM contract with outfielder George Springer, reports Bob Nightengale of USA Today (via Twitter). Springer, a Super Two player who was in his second trip through the arbitration process, will earn $12MM in each year of the deal. Springer is represented by the Legacy Agency. 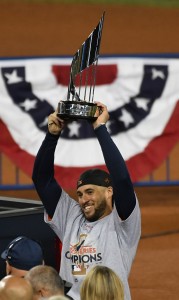 Springer and the Astros had yet to resolve their arbitration case and were scheduled to head to a hearing this month. He’d filed for a $10.5MM salary, while Houston had countered with a figure of $8.5MM (as shown in MLBTR’s 2018 Arbitration Tracker). Instead, the two-year pact will buy out Springer’s second and third years of arbitration eligibility, though he’ll have one remaining year of arbitration left upon completion of this deal given the aforementioned Super Two status.

The 28-year-old Springer is coming off the finest season of his big league career to date, having posted a sensational .283/.367/.522 batting line with 34 homers and 29 doubles through 629 plate appearances. Springer logged a career-high 643 innings in center field this past season and graded well there per both Defensive Runs Saved and Ultimate Zone Rating, although those two metrics, which are usually bullish on his corner-outfield work, didn’t regard his defense in right field very favorably in 2017. (With Josh Reddick, Derek Fisher and Marwin Gonzalez all in the mix for corner outfield time in 2018, Springer figures to once again spend more time in center field than in right field this coming season.)

Overall, Springer was a driving force not only behind the Astros’ romp of the American League West but the team’s first World Series championship in franchise history. Springer went 7-for-17 with a homer, two doubles and two walks in 19 ALDS plate appearances, and after an ice-cold ALCS showing against the Yankees, he laid waste to Dodgers pitching in the World Series en route to MVP honors. Springer belted five homers in seven games and hit .379/.471/1.000 through 34 PAs in the Fall Classic.

Now that Springer has agreed to a two-year deal and Ken Giles has won his arbitration hearing, the Astros’ lone remaining arbitration case if that of Collin McHugh. The right-hander filed for a $5MM salary for the upcoming season, while the Astros countered with a $4.55MM sum.