Feb. 18: The deal is official, Mark Feinsand of MLB.com tweets. Along with the previously reported incentives, it includes a $250K assignment bonus if the Mets trade Vargas, according to Heyman (Twitter link). To make room for Vargas, the Mets placed infielder T.J. Rivera on the 60-day DL. Rivera underwent Tommy John surgery last September.

10:15am: The option year is worth an additional $8MM, DiComo reports (on Twitter).

9:44am: The Mets are in agreement with free-agent lefty Jason Vargas, pending a physical, reports Jon Heyman of FanRag Sports (via Twitter). It’s a two-year deal, according to Anthony DiComo of MLB.com (Twitter link). Mike Puma of the New York Post had recently reported that the Mets were maintaining “solid interest” in Vargas, who is represented by CAA Baseball. 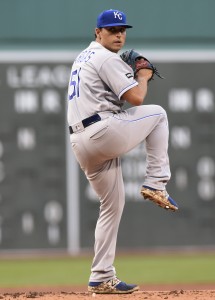 Vargas, who turned 35 two weeks ago, will add some much-needed stability to a Mets rotation that has been devastated by injuries in recent seasons. Last year alone, the Mets saw Noah Syndergaard, Matt Harvey, Steven Matz, Zack Wheeler, Seth Lugo and Robert Gsellman all combine to spend significant time on the disabled list, with only Jacob deGrom remaining healthy to shoulder a full season’s workload.

The 2017 season, meanwhile, served as a platform for the veteran Vargas to prove that he was healthy after Tommy John surgery wiped out most of his 2015-16 campaigns. It was a rather dichotomous season for Vargas, who surged to a 2.22 ERA through his first 101 innings of the season, earning a deserved All-Star berth in the process. Vargas’ early success was buoyed by an unsustainable 86 percent strand rate, however, and that figure cratered over the final three months as his control took a turn for the worse. After that sparkling 2.22 ERA through the end of June, Vargas limped to a 6.66 ERA in his final 16 starts.

It’s possible, of course, that some fatigue in his first full year back from Tommy John surgery impacted Vargas. Control has never been an issue for him, after all, but he nonetheless averaged nearly four walks per nine innings pitched over the final three months of the season. Overall, though, the results on the year were solid. Vargas totaled a 4.16 ERA while averaging 6.7 K/9, 2.9 BB/9 and 1.4 HR/9 with a 40.3 percent ground-ball rate.

That body of work lines up fairly closely to the 4.01 ERA he turned in over 1082 2/3 innings from 2009-15 — the stretch from which he established himself as a viable Major League starter up until he underwent Tommy John surgery as a member of the Royals.

While the yearly breakdown of the contract remains unclear, the addition of Vargas should push the Mets’ payroll north of the $150MM mark for the second consecutive season, though that number includes David Wright’s $20MM salary, 75 percent of which is covered by insurance should the oft-injured former star head back to the 60-day DL. Vargas’ two-year deal pushes the team’s 2019 commitments well beyond $90MM more than a year in advance as well (though, again, 75 percent of Wright’s $15MM salary next season is covered by insurance).

This will mark the second stint with the Mets for Vargas, who was traded to New York from Miami in the 2006 deal that sent Matt Lindstrom to the Marlins. Vargas only pitched 10 1/3 innings in the Majors with the Mets the first time around and was ultimately traded to the Mariners in the 2008, three-team J.J. Putz swap. He’ll be reunited with former Royals pitching coach in Queens, giving him some added familiarity as he re-acclimates to his new surroundings.

For the Mets, the Vargas addition is somewhat surprisingly the third multi-year free-agent pickup that has transpired after reports suggesting that the team had limited remaining funds. After signing Anthony Swarzak to a two-year, $14MM deal back in December, the Mets have now added Jay Bruce (three years, $39MM), Todd Frazier (two years, $17MM) and Vargas, in addition to more modest one-year commitments for Jose Reyes ($2MM) and Adrian Gonzalez ($545K).