The Orioles have announced an agreement with free-agent righty Andrew Cashner. It’s a two-year, $16MM contract, reports Roch Kubatko of MASNsports.com (via Twitter). Cashner is represented by CAA Sports.

Cashner will receive consecutive salaries of $5MM and $8MM, Kubatko reports (Twitter links). The remaining $3MM is a signing bonus that will be deferred to 2020 through 2022, according to Kubatko and Jon Heyman of Fan Rag (Twitter link).

There’s also a $10MM vesting option on the contract, in addition to $5MM available in yearly incentives, reports SB Nation’s Chris Cotillo (links to Twitter). The option becomes guaranteed if Cashner throws 340 innings over the first two seasons of the deal. It’d become a $10MM player option for Cashner in the event that he reached 360 total innings from 2018-19. Cashner has topped 170 innings in a season only twice, making those fairly lofty goals for a pitcher with his lack of durability. He’d need replicate his career-best 2015 workload (184 2/3 innings) in consecutive years to obtain the player option. 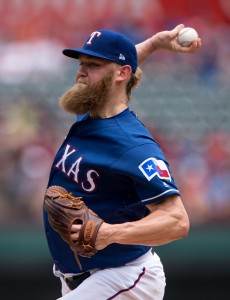 Cashner, 31, will give the Orioles some desperately needed depth for their rotation, as the only locks for starting jobs until this pickup were righties Kevin Gausman and Dylan Bundy. He’s made at least 27 starts in each of the past three seasons and is coming off a 3.40 ERA through 166 2/3 innings with the Rangers, albeit with less-impressive marks of 4.6 K/9 against 3.5 BB/9.

Cashner averaged 7.9 strikeouts per nine innings pitched in 2015-16 with the Padres and Marlins, but he somewhat bizarrely saw that number plummet upon signing on with the Rangers. The right-hander did significantly decrease the usage of his four-seam fastball in favor of cutter/sinker, so it’s possible that his pitch selection in 2017 played a large role in his decline in strikeouts. Cashner’s fastball velocity, after all, continued to average better than 93 mph. Still, his 6.1 percent swinging-strike rate and 4.6 K/9 mark were among the bottom two marks among all qualified starters.

Whatever the reasons behind it, the sudden lack of missed bats has to be considered somewhat of a red flag, especially moving into an AL East division that is stacked with some fairly potent lineups. Cashner should give the Orioles a more steadier option to occupy the third slot in the rotation than virtually any of the team’s internal candidates, though he currently profiles more as a back-of-the-rotation arm than mid-rotation starter. The O’s have reportedly been striving to add three starters this winter, including one lefty, so it’s quite possible that Cashner is the first of multiple additions for Baltimore in the weeks to come as Spring Training progresses.

It’s been a rather bleak scene for all free agents outside of the relief market thus far in the offseason, but while Cashner surely waited longer than he’d have hoped to land a deal, his $16MM guarantee falls pretty well within the parameters of reasonable expectations. Heading into the offseason, MLBTR listed Cashner 27th among free agents in terms of earning capacity and pegged him for a two-year, $20MM pact.