FEBRUARY 13: Romo is guaranteed $2.5MM in the deal, per Marc Topkin of the Tampa Bay Times (via Twitter). The deal is official.

FEBRUARY 9: The Rays have agreed to terms on a one-year, Major League deal with right-hander Sergio Romo, reports Jesse Sanchez of MLB.com (via Twitter). He can earn up to $2.75MM, per Jon Heyman of Fan Rag (Twitter link), though the amount guaranteed remains unclear. The deal is still pending a physical. Romo is a client of Meister Sports Management. 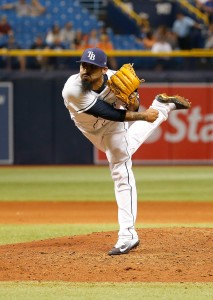 Romo, 35 next month, was cut loose by the Dodgers after struggling through 25 innings in Los Angeles last season but found new life when L.A. sent him to the Rays in a minor trade following a DFA. In 30 2/3 frames with Tampa Bay, Romo thrived, pitching to a minuscule 1.47 ERA with an excellent 28-to-7 K/BB ratio and a 38.8 percent ground-ball rate.

Though Romo’s average velocity on his four-seamer and sinker both checked in under 87 mph last season, his penchant for missing bats didn’t deteriorate whatsoever. While one wouldn’t think it when looking at the radar gun, Romo has averaged better than a strikeout per inning in all but two seasons of his career, and he averaged 9.5 K/9 on the season as a whole in 2017. That impressive mark was accompanied by a 14.9 percent swinging-strike rate that tied him with Cody Allen for 25th among 155 qualified relievers.

Romo will serve as an elder statesman in a young and rather inexperienced Tampa Bay bullpen. At present, Alex Colome projects as the team’s closer, though trade rumblings surrounding his name have persisted even as Spring Training approaches. The Rays are reportedly still under ownership directive to cut a bit more payroll, and that figures to be ever the more true after adding Romo on a one-year deal — even if it comes at a modest rate. Should Colome ultimately be moved, it stands to reason that Romo, formerly the Giants’ closer, could find himself in the mix for saves early in the season.

Beyond Romo and Colome, the Rays’ bullpen, at least from the right side, looks somewhat undefined. Dan Jennings and Jose Alvarado should hold down spots as southpaws, while Matt Andriese figures to pitch from the right side in a multi-inning capacity (though Andriese could end up in the rotation depending on whether Jake Odorizzi, another trade candidate, is moved prior to Opening Day).

Other right-handers who could work in a middle relief or setup capacity include Austin Pruitt, Chaz Roe, Andrew Kittredge, Ryne Stanek, Chih-Wei Hu, Jamie Schultz and Diego Castillo — each of whom is on the 40-man roster. The Rays will also have some veterans with big league experience in camp on minor league deals, including righty Evan Scribner and lefties Vidal Nuno and Jonny Venters.