The Rays are set to promote top prospect Jake Bauers from Triple-A Durham, reports Marc Topkin of the Tampa Bay Times (via Twitter). The first baseman/outfielder will join the team for his MLB debut on Thursday. 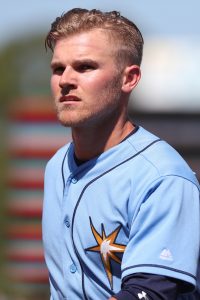 Bauers is not yet hitting for a great deal of power but is off to a fine start in Durham, slashing .279/.357/.426 with five homers, 14 doubles and 10 steals (in 16 attempts). He’s drawn a walk in 10.4 percent of his 222 trips to the dish and has whiffed at a 21.2 percent clip. Defensively, Bauers has spent the bulk of his time in the field at first base, his primary position in the minors, but has logged 47 innings in the outfield corners as well (35 in left field and a dozen in right field).

Originally a seventh-round pick of the Padres back in 2013, Bauers went from San Diego to Tampa Bay in the three-team blockbuster that saw Wil Myers land with the Padres, sent Trea Turner to the Nationals and landed the since-traded Steven Souza Jr. in a Rays uniform. While that three-team deal features plenty of name value now, the Nats look to have come out quite a bit ahead thanks to the success of Turner (and righty Joe Ross, who’s currently mending from Tommy John surgery). Bauers, though, will now look to help the Rays recoup some value in his first taste of the Major Leagues.

C.J. Cron has hit quite well as the Rays’ primary first baseman, but Tampa Bay has received modest production from its outfield. With Kevin Kiermaier on the shelf and Denard Span traded to the Mariners, the Rays have been utilizing Mallex Smith, Carlos Gomez, Johnny Field and Rob Refsnyder in the outfield of late.

It stands to reason that the left-handed hitting Bauers could join that mix. Scouting reports on him indicate that while he’s a better defensive first baseman than outfielder, he’s slimmed down in recent years and can handle the outfield grass (or turf, as it were) adequately while chipping in with an above-average hit tool and average or better power at the plate.

The timing of Bauers’ promotion is such that he won’t be eligible for free agency until at least the end of the 2024 season, though his early-June debut figures to leave him on the bubble for Super Two arbitration status down the line.

There’s no exact cutoff date for that nebulous distinction, as it’s dependent on the service time of the other players in Bauers’ service class, but it seems likely that he’ll fall just shy of qualifying. There are only 116 days remaining in the season from the point at which Bauers will be formally promoted, and the lowest that the Super Two cutoff has fallen in recent seasons has been two years, 122 days of MLB service time.