The Astros have struck a deal with the division-rival Angels to acquire backstop Martin Maldonado, as Jeff Fletcher of the Southern California News Group first reported (via Twitter). Young lefty Patrick Sandoval will go to the Angels along with $250K in international pool money. 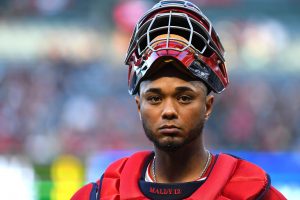 With the move, Houston has bolstered its catching unit as it awaits the return of veteran Brian McCann from the DL. Maldonado will displace Tim Federowicz, who has been designated for assignment, per Jake Kaplan of The Athletic (via Twitter). The Astros’ new catcher will pair with the emergent Max Stassi to split up the work behind the dish for at least the next several weeks.

Maldonado is earning $3.9MM this year before qualifying for free agency at season’s end. He originally came to Los Angeles in the deal that sent fellow receiver Jett Bandy to the Brewers before the 2017 season.

Over the past two years, Maldonado has performed at the plate much as he did in his prior MLB action. He’s a weak on-base threat who only partially makes up for that with some pop. For his career, Maldonado owns a .219/.291/.347 batting line — good for a 72 OPS+ that he has matched almost exactly in both 2017 and 2018.

Clearly, the appeal lies more in Maldonado’s work with his gear on. The 31-year-old is a well-regarded all-around performer behind the dish. In particular, though he has not earned prime grades for his framing in 2018, Maldonado has in years past rated as one of the sport’s best at winning strikes for his pitchers.

If nothing else, the addition of Maldonado will give the Astros some much-needed insurance with McCann still working back from a knee surgery. Just how things will be sorted out in the postseason remains to be seen, but the Astros will surely feel confident they’ll have solid options available the rest of the way.

Meanwhile, the Halos are more or less acknowledging the obvious: this won’t be the year they break back into the postseason. The 21-year-old Sandoval represents something of a consolation prize for a disappointing campaign.

Sandoval was an 11th-round pick in 2015. He has turned in an impressive campaign thus far, working to a 2.56 ERA in 88 frames — most of them at the Class A level but his more recently at High-A. Sandoval has struck out 9.9 and walked just 1.5 batters per nine on the year. Baseball America recently wrote up the young southpaw, characterizing him as a legitimately interesting prospect.