2:46pm: Chicago will send just over $1MM, per Ken Rosenthal of The Athletic (via Twitter).

12:23pm: The Brewers have officially agreed to a deal to acquire righty Joakim Soria from the White Sox, as first reportedy by MLB.com’s Mark Feinsand (via Twitter). Former first-round pick Kodi Medeiros is one piece in the deal, per Chris Cotillo of MassLive.com (Twitter link), with Feinsand tweeting that righty Wilber Perez is the other. 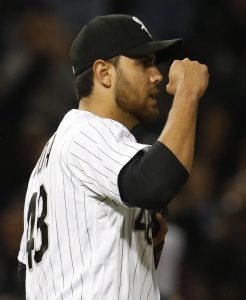 Per the announcement, the White Sox will pay down an unstated portion of Soria’s contract. He’s earning $9MM this year — some of it still paid for by the Dodgers, as part of the three-team deal that sent him to Chicago — with a $1MM buyout still to come on a $10MM 2019 mutual option.

While his name hasn’t been circulated much around the rumor mill, Soria ranked 12th on MLBTR’s recent list of the top 75 trade deadline candidates on the basis of his strong showing thus far. He becomes the sixth of the first 13 names on that ranking to be dealt in the past week or so.

There’s a lot to like about the way the veteran hurler is throwing right now. Soria is getting whiffs both by drawing quite a few more chases out of the zone (35.6%) than ever before and by holding opposing hitters to a 77.3% contact rate on pitches in the zone, which is also a career-best rate.

Soria carried sparkling peripherals last year, too, though he only ended the season with a 3.70 ERA, so he seems to be on something of a late-career run of excellence. The long-time late-inning hurler has tamped down on the home runs quite a bit over the past two seasons, allowing only three balls in total to leave the yard in that span.