Less than an hour after acquiring lefty Zach Duke in a trade with the Twins, the Mariners announced that they’ve landed right-hander Adam Warren from the Yankees in exchange for international bonus pool allocations. Seattle didn’t specify the amount in its release, though they’re reported to be sending $1.25MM of slot money to New York in the swap. In order to open a spot on the 40-man roster, the Mariners designated infielder Gordon Beckham for assignment. 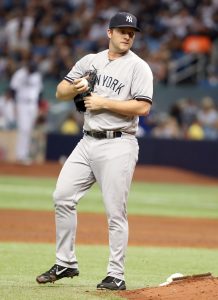 Warren, who’ll soon turn 31, is earning $3.32MM on the year and is still owed $1.106MM of that sum. That’ll now become the responsibility of the Mariners, who’ll control Warren only until the end of the season, when he’s set to become a free agent.

The move promises to deepen the Seattle relief unit by adding a hurler who has been quite successful while pitching on a big stage in New York. Though Warren struggled in a stint with the Cubs in 2016, he carries a 3.18 ERA in 407 career frames with the Yanks.

This year, Warren has shown an ability to generate quite a few more strikeouts (11.1 per nine innings) than he has over his career (7.9). He is carrying a career-best 11.0% swinging-strike rate, though he has been near that number in some prior seasons. Through thirty frames, Warren owns a 2.70 ERA. While he has struggled a bit against lefties, he has dominated right-handed hitters, who have produced a paltry .169/.246/.271 slash against him.

The veteran Beckham, 31, appeared in 13 games with Seattle this season and batted just .200/.263/.229 in 40 trips to the plate. He’d been with Seattle’s top affiliate in Tacoma, where he’d delivered a productive .305/.406/.469 slash through 315 plate appearances. The Mariners will have a week to trade Beckham, release him or run him through outright waivers in an attempt to keep him in the organization.

For the Yanks, this swap tweaks the club’s pitching mix, as it paved the way for New York’s acquisition of Lance Lynn from the Twins in exchange for Tyler Austin and prospect Luis Rijo. While Lynn doesn’t have an appealing ERA this year, he has loads of rotation experience and thus provides some added protection in that area. Plus, the move effectively allows the club to swap out some of its upper-level talent for far-away prospects, much as it has done in recent trades with the Cardinals and with the White Sox that have brought international spending money into the Yanks’ coffers.

Ken Rosenthal and Emily Waldon of The Athletic first reported the deal (via Twitter). MLB.com’s Mark Feinsand tweeted news of the return.