The Marlins and Mariners have announce a deal that sends veteran outfielder Cameron Maybin to Seattle, Ryan Divish of the Seattle Times tweets. Prospect Bryson Brigman and $250K of international pool money are heading to Miami in the deal, per reports from Divish, Jon Heyman of Fancred (via Twitter), and MLB.com’s Jesse Sanchez (via Twitter). 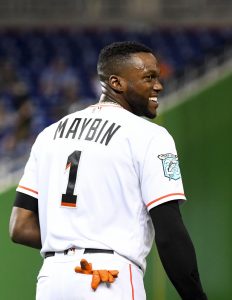 Maybin, 31, is earning just $3.25MM on the season under the one-year deal he inked over the winter. That makes him an affordable addition to the Seattle organization.

Though he struggled for much of the early portion of the season at the plate, Maybin has turned things on recently. Over the month of July, Maybin owns a .309/.427/.456 batting line with three home runs and five steals through 68 plate appearances. On the year, he’s producing at about 10% below the league-average rate, much as he did last year.

Of course, much of Maybin’s value is tied up in his legs and glove. He’s grading poorly on the basepaths this year, but that’s likely a blip for a player who was once an elite baserunner and has been quite good in the recent past. Maybin has performed well at all three outfield spots this year in Miami.

For the Mariners, this move adds another versatile piece to the outfield mix. The club added Denard Span a few months back, and he has performed quite well. Mitch Haniger has proven worthy of regular time and Ben Gamel has knocked around opposing righties. Maybin could ultimately displace Guillermo Heredia, who has stalled out at the plate, or join him to form a pair of right-handed options to go with the lefty-hitting Span and Gamel.

Clark Spencer of the Miami Herald (via Twitter) and Craig Mish of MLB Network Radio (via Twitter) reported that the Fish were about to make another swap.