The Indians struck a trade with the Tigers that will bring center fielder Leonys Martin to Cleveland for shortstop prospect Willi Castro as well as minor league righty Kyle Dowdy.  The deal is now official. 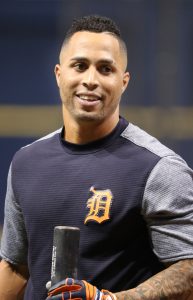 This match makes quite a lot of sense on paper. The Indians, after all, are running away with things in the AL Central but had a clear need in the outfield. In particular, the team was missing a left-handed-hitting outfielder capable of playing center after watching Bradley Zimmer struggle and ultimately go down for the year with an injury.  Martin will likely share time up the middle with veteran Rajai Davis, who hits from the right side. There’s not much left on Martin’s tab for the present season, as he’s earning just $1.75MM. He’ll also be controllable for 2019 via arbitration, so could represent a piece of the puzzle next year as well.

Though Martin’s .251/.321/.409 batting line is below average, it’s still the best work of his career to date.  A left-handed batter, Martin is an ideal candidate for a platoon.  He’s long been a defensive asset in center field, with strong metrics dating back to 2013.

On the other side of this swap, the Tigers had every reason to get what they could for Martin. While he could certainly have been retained, cashing him in now better fits the team’s priorities.  Castro, a shortstop signed five years ago out of Puerto Rico, earned a 50 overall grade from MLB Pipeline.  Currently at Double-A, Castro is a switch-hitter with an above average bat and a good chance to stick at shortstop, according to MLB Pipeline and Baseball America.  The Tigers did well to sign Martin affordably in December, and then spin him into Castro several months later.  Dowdy, a 25-year-old righty, began the year as a Double-A reliever, then jumped into the Triple-A rotation for the Toledo Mud Hens before a move back to Double-A.

Robert Murray of The Athletic broke the trade, with Anthony Fenech of the Detroit Free-Press adding the Dowdy detail.  Photo courtesy of USA Today Sports Images.