12:47pm: Jackson may never even play for the Rangers, per Gerry Fraley of the Dallas Morning News. General manager Jon Daniels told the outfielder “to hold off on reporting,” Fraley writes. It seems they’ll try to trade him.

12:05pm: The Rangers have acquired outfielder Austin Jackson, reliever Cory Gearrin and right-hander Jason Bahr from the Giants in exchange for a player to be named later or cash considerations, according to Texas’ executive vice president of communications, John Blake. To clear room on their 40-man roster, the Rangers moved relievers Matt Bush and Tony Barnette to the 60-day disabled list. Meanwhile, the Giants will select both outfielder Steven Duggar and righty Ray Black from Triple-A, John Shea of the San Francisco Chronicle tweets. 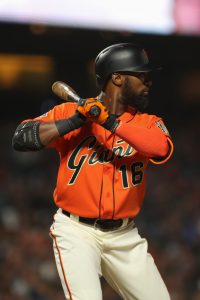 This trade amounts to a cost-cutting move for the Giants, who were narrowly under the $197MM competitive-balance tax threshold entering Sunday. Now, with the Rangers taking on the salaries of both Jackson and Gearrin (per Ken Rosenthal of The Athletic), the Giants are seemingly in better position to make some moves around the July 31 non-waiver trade deadline as they try to hang in the NL West race.

San Francisco added Jackson on a two-year, $6MM free-agent contract last winter on the heels of a season in which the veteran was a key role player for the Indians. The 31-year-old Jackson has gone backward this season, though, as he took 165 plate appearances with the Giants and hit just .242/.309/.295 with no home runs, 14 unintentional walks and 59 strikeouts. He’ll now attempt to revive his season in his native Texas.

Along with helping the Giants get out from under the salaries of Jackson and Gearrin, the out-of-contention Rangers also added Bahr – who ranked as San Francisco’s 27th-best prospect at MLB.com. Bahr, 23, joined the Giants just last year as a fifth-round pick. He has since pitched solely at the Single-A level, including 84 2/3 innings of 2.55 ERA ball this season.

With the Jackson experiment having failed for the Giants, they’ll introduce the well-regarded Duggar to their outfield mix. The 24-year-old Duggar, a 2015 third-round pick and MLB.com’s third-ranked Giants prospect, owns a .272/.354/.421 line in 356 Triple-A plate appearances this season. He’ll join a San Francisco outfield that hasn’t gotten average or better offensive production from anyone but Andrew McCutchen, Gorkys Hernandez and Austin Slater this year.