OCTOBER 29: Wainwright receives a $2MM guarantee, per Jon Heyman of Fancred (via Twitter). Ken Rosenthal of The Athletic (Twitter link) has details on the extensive list of incentives. Wainwright can earn the following salary boosts:

OCTOBER 11, 2:18pm: Wainwright’s contract includes incentives based on both starting and relieving, Derrick Goold of the St. Louis Post-Dispatch reports (on Twitter). The contract’s base salary remains unknown.

12:24pm: The Cardinals announced Thursday that they’ve re-signed right-hander Adam Wainwright to a one-year contract for the 2019 season. Wainwright, who recently turned 37, had been slated to hit free agency. He’s a client of Aegis Sports Management. 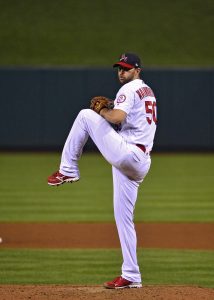 The 2019 season will mark the 15th Major League season of Wainwright’s illustrious career — each of which has come as a member of the Cardinals. A two-time NL Cy Young runner up and four-time top-three finisher in that voting, Wainwright has now tied righty Bob Forsch for the third-most seasons as a Cardinals pitcher in team history.

This past season was an injury-plagued campaign for Wainwright, who pitched just 15 1/3 innings in April before hitting the disabled list due to elbow inflammation. He returned after a few weeks only to land on the disabled list after just 2 1/3 innings. That second DL stint, which was also initially due to elbow inflammation lasted nearly four months.

Once healthy enough to return to the mound, Wainwright reeled off 17 shutout innings on a minor league rehab assignment and returned to the Cards to make four starts in September. He was tagged for four runs in three of those four starts and turned in an unsightly 4.84 ERA in 22 1/3 innings, but he also notched an impressive 25-to-4 K/BB ratio in that time and saw his fastball jump back up to the same levels at which it sat in 2016-17.

The question for St. Louis now is one of just how Wainwright will factor into the 2019 staff. The Cards weren’t lacking rotation options even without Wainwright, with Carlos Martinez, Jack Flaherty, Miles Mikolas, Michael Wacha, Alex Reyes (if healthy), Luke Weaver, Dakota Hudson, John Gant, Daniel Poncedeleon and Austin Gomber all on the roster. It’s not clear that he’ll be promised a rotation spot at this point, but perhaps a return to the bullpen shouldn’t be entirely discounted. The Cardinals’ relief corps was somewhat jumbled late in the season after a massive overhaul prior to the non-waiver trade deadline in which Greg Holland, Sam Tuivailala and Tyler Lyons were all sent packing.

Bud Norris, who spent much of the season closing in St. Louis before ceding that role to Martinez in the latter’s return from the disabled list, is a free agent and isn’t any sort of lock to return. August addition Tyson Ross is bound for the open market, too. Meanwhile, 2017-18 offseason pickups Luke Gregerson (two-year, $11MM free-agent deal) and Dominic Leone (acquired from the Blue Jays for Randal Grichuk) combined for just 36 2/3 innings due to injury.

The 2018 season wasn’t all bad for the Cards in terms of bullpen developments, though. Flamethrowing young righty Jordan Hicks arrived on the scene and established himself as a potential long-term piece, while righty John Brebbia somewhat quietly turned in an excellent sophomore season. Wainwright could certainly be penciled in to join that pair, along with some of the rotation candidates who don’t ultimately secure starting jobs, though perhaps the team will simply wait until Spring Training to see how the staff comes together. The Cards, after all, figure to have a busy offseason ahead of them as they look to rework a flawed roster, and it’s possible that some of those younger pitching options could land elsewhere via the trade market.

Regardless of his role, Wainwright will return to serve as a leader on a staff of considerably younger arms, and his new contract will give him one more year with Yadier Molina — one of the most iconic pairings in franchise history.