TODAY: The deal has been announced by the Yankees.

YESTERDAY, 6:53pm: Sabathia confirmed on Brandon Steiner’s podcast earlier this week that he plans for 2019 to be his final season.

5:31pm: The two sides are, in fact, in agreement on a contract, Jeff Passan of Yahoo Sports reports (on Twitter). The deal is pending a physical.

5:24pm: The Yankees and left-hander CC Sabathia are working through the “final details” of what will be a one-year, $8MM contract for the 2019 season, reports Joel Sherman of the New York Post (Twitter link). Sabathia, according to Sherman, had little interest in exploring the open market and instead preferred to quickly hammer out a one-year pact to return to the Bronx for what could very well be the final season of his illustrious career. Sabathia is represented by Kyle Thousand of Roc Nation Sports. 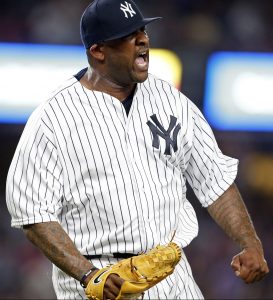 Sabathia, 38, will slot back into the Yankees’ rotation behind Luis Severino and Masahiro Tanaka, though the team will surely be in the market to add some additional rotation help. Lefty J.A. Happ is set to hit the open market, while fellow southpaw Jordan Montgomery will miss a significant chunk of the 2019 campaign after undergoing Tommy John surgery earlier this year. Top prospect Justus Sheffield headlines the team’s internal options, with righties Chance Adams, Jonathan Loaisiga and Domingo German also serving as depth. Sonny Gray, too, remains in the organization for now, but general manager Brian Cashman has indicated that expects to find a trade partner for the change-of-scenery candidate.

The Yankees, though, who dipped back under the luxury tax threshold this season, will undoubtedly be in the mix for any top-end starters that could be available this winter. On the free-agent market, that includes lefties Patrick Corbin, Dallas Keuchel, Happ and perhaps Japanese southpaw Yusei Kikuchi. The trade market could yet bear further enticing options, with recent reports indicating that the likes of Corey Kluber and James Paxton could become available.

Sabathia may not be the dominant arm that he once was, but the crafty veteran still gave the Yankees a strong 2018 season and would be a fine fifth starter behind the presumptive external options the Yankees plan to add. Sabathia, after all, notched a 3.65 ERA with 8.2 K/9, 3.0 BB/9, 1.12 HR/9 and a 44.4 percent ground-ball rate over the life of 29 starts and 153 innings this past season. His swinging-strike and chase rates were the best they’d been since 2012, and his fastball velocity still checked in a bit north of 90 mph — roughly in line with his past four seasons.