The Angels have added their second starting pitcher of the week, announcing on Thursday that they’ve signed righty Trevor Cahill to a one-year contract for the 2019 season. Cahill, a client of John Boggs & Associates, will reportedly earn a $9MM base salary and can secure an additional $1.5MM via an incentives package. Specifically, the deal is said to pay him $250K for reaching each of 100, 110, 120 and 130 innings, and he’d notch another $500K upon reaching 170 innings. He’d also reportedly land a $250K assignment bonus in the event that he’s traded. 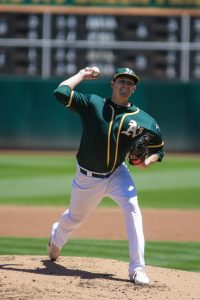 Cahill will now join the also recently signed Matt Harvey as a rental starter in Anaheim. That seems to be a good outcome for the team, which will promise the pair a combined $20MM without extending its obligations past the 2019 season.

Entering the winter, MLBTR predicted that both Cahill and Harvey would command two-year, $22MM contracts. While the early returns on the rotation market were relatively promising, the more recent market markers have been suboptimal from the players’ perspective, with several hurlers securing less years than might have been anticipated.

Cahill, who’ll open the 2019 season at 31 years of age, has certainly not been the steadiest option in recent years, but he has shown some fascinating skills. Since returning to the rotation following a bounceback 2016 in a relief capacity, Cahill has struck out nearly a batter per inning while drawing grounders near his career 55.0% rate.

Outside of some late-’17 struggles, Cahill has been quite productive of late. He ended up giving the A’s 110 innings of 3.76 ERA ball last year, with peripherals to match — including a career-high 11.7% swinging-strike rate. Of course, DL stints again left cause for concern, which surely hurt Cahill’s bid for multiple seasons in free agency.

It’s certainly possible to look at the Angels rotation mix now and imagine a solid, cost-efficient unit. Andrew Heaney and Tyler Skaggs both showed well last year, while Jaime Barria and Felix Pena established themselves as solid options as well. Nick Tropeano is still around and will hope for a bounce back after some struggles upon returning from Tommy John surgery. JC Ramirez could return from the same procedure at some point. Luke Farrell, Miguel Almonte, and Dillon Peters represent depth pieces.

That said, it’s tough to see that as a high-grade unit even in the most optimistic of scenarios. And all of the team’s most-accomplished starters come with major recent health issues, including the two newest acquisitions. In a sense, it’s a continuation of last year’s approach of hoping to get enough innings from enough worthwhile pitchers to add up to a quality overall staff. It didn’t really work out in the aggregate. And now the highest-upside pieces are gone, with Garrett Richards and Matt Shoemaker out of the organization and Shohei Ohtani getting comfortable with a new ulnar collateral ligament.

The Halos reportedly pursued more notable targets, reportedly falling short in bids for both Patrick Corbin and Nathan Eovaldi earlier this winter. It’s still possible the club will continue angling for other arms, with Dallas Keuchel available in free agency and a few potential notable trade candidates, but it could also be that the club is now done with its rotation-building efforts. If that’s the case, then perhaps GM Billy Eppler will turn to other avenues to improve. The bullpen, catching unit, and position-player bench mix could all stand to be improved. Perhaps it’s not out of the question to imagine a surprise run at a high-level bat, though we’ve seen no real indication of that to this point.

Ken Rosenthal of The Athletic first reported the agreement and the terms (via Twitter). Mark Feinsand of MLB.com and Jon Heyman of Fancred added details on the incentives and assignment bonus (Twitter links).