The Padres announced Thursday that they’ve bolstered their infield depth with the addition of veteran second baseman Ian Kinsler on a two-year contract with a club option for a third season. The BBI Sports Group client will reportedly take home an $8MM guarantee in the form of a $3.75MM salary in both 2019 and 2020, as well as a $500K buyout on a $3.5MM option for the 2021 season. 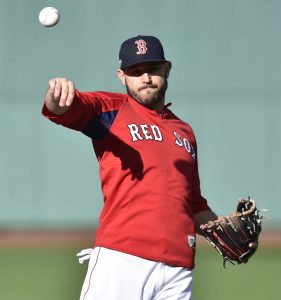 Kinsler, 36, is a known commodity for Padres GM A.J. Preller, who was an assistant GM with the Rangers during Kinsler’s tenure in Texas. Kinsler will bring to the San Diego organization one of the game’s premier defensive players, though his once-potent offense has tailed off in recent seasons. Since Kinsler’s debut in 2006, only six players in all of Major League Baseball have topped his mark of +118 Defensive Runs Saved. That’s not just a case of longevity, either, as Kinsler ranks fourth in DRS even over the past half decade and turned in a strong +10 DRS in 2018 alone. Ultimate Zone Rating has been similarly bullish on his defensive aptitude.

The 2018 campaign, however, saw Kinsler post a career-worst .240/.301/.380 batting line through 534 plate appearances between the Angels and Red Sox. His bat was only a bit below the league average with the Halos prior to the swap, though his production diminished greatly in 137 PAs with the Red Sox (.242/.294/.311). Overall, however, Kinsler’s premium defense and quality baserunning still led both Baseball-Reference and Fangraphs to peg him at a bit more than two wins above replacement. A move to the spacious Petco Park probably won’t help Kinsler’s offense, but his glove and speed give him a fairly high floor at what looks to be a palatable price point.

Kinsler steps onto a Padres roster that, since season’s end, has jettisoned both Cory Spangenberg and Carlos Asuaje. He could get the early bulk of the work at second base in the event that Luis Urias heads to Triple-A for further development or, as MLB.com’s AJ Cassavell suggests (via Twitter) should Urias open the year at shortstop. In somewhat contradictory fashion, though, Ken Rosenthal of The Athletic tweets that the Friars still consider Urias their primary second baseman, adding that Kinsler could work at third base early in the year.

Suffice it to say, the organization may not yet have a defined role in mind for Kinsler, whose ultimate position is likely somewhat dependent on the moves that San Diego makes between now and Opening Day. The Padres do have one of the game’s best overall prospects in shortstop Fernando Tatis Jr., though once Tatis and Urias are both in the Majors, Kinsler could slide over to third base on a full-time basis or assume a utility role off the bench. In any event, it seems clear that Kinsler will be counted upon to appear at multiple positions over the life of his Padres tenure.

Kinsler’s addition further calls into question Jose Pirela’s role with the team, though it’s worth noting that the Friars have a full 40-man roster and will need to subtract someone in order to make the contract official. From a payroll standpoint, Kinsler should push the Padres to somewhere in the $83-84MM range for the coming season. The fact that there’s an option year on the deal suggests there’ll be a buyout, and therefore the annual salaries will both likely check in a bit south of $4MM. And the Padres only had about $60.5MM on the books for the 2020 season prior to adding Kinsler.