8:13pm: The D-backs formally announced the signing via a press release.

5:43pm: The Diamondbacks are in agreement on a two-year, $5.5MM contract with right-hander Merrill Kelly, reports Jeff Passan of Yahoo Sports (Twitter links). The contract will pay Kelly $2MM in 2019 and $3MM in 2020. It also includes a pair of club options, per Passan, the first of which is valued at $4.25MM and comes with a $500K buyout. The second of the two options comes with a $5.25MM value, he adds. 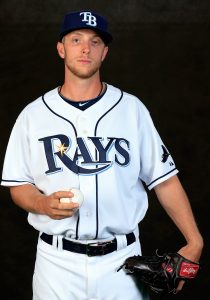 Kelly, a 30-year-old righty, has never pitched in the Majors but just wrapped up a strong four-year run in the hitter-friendly Korea Baseball Organization. The former Rays farmhand has been particularly impressive over the past two seasons, during which time he has made 61 starts and tossed 390 1/3 innings of 3.64 ERA ball with 341 strikeouts (7.9 K/9) and 105 walks (2.4 BB/9). He’s being viewed as a starter and is expected to join the Diamondbacks’ rotation next season.

The Arizona rotation has taken a hit this winter with the loss of Patrick Corbin, who reportedly agreed to a six-year contract with the Nationals earlier today. Arizona will also be without Taijuan Walker for much of the 2019 season after the righty underwent Tommy John surgery earlier this year, and the D-backs also non-tendered Shelby Miller last week. The top names remaining in the Diamondbacks’ rotation mix include Zack Greinke, Robbie Ray, Zack Godley and perhaps Matt Andriese, though there’s been ample trade chatter surrounding the veteran Greinke this offseason.

While Kelly lacks big league experience, the contract is a rather low-risk investment for the Diamondbacks, who will hope that Kelly can be the 2019 version of the Cardinals’ Miles Mikolas. It’s the second consecutive season in which GM Mike Hazen and his staff have given a multi-year contract to a pitcher who has no MLB experience. Last winter’s two-year pact for right-hander Yoshihisa Hirano paid off in spades — 66 1/3 innings of 2.44 ERA ball out of the bullpen — and Kelly will bring another intriguing overseas track record at a minimal price.