6:25pm: The clubs have announced the swap.

5:18pm: The Mariners and Brewers are closing in on a swap that would send outfielder Domingo Santana to Seattle, per Ryan Divish of the Seattle Times (Twitter link). Outfielder Ben Gamel and righty Noah Zavolas are going to the Brewers in the deal, Corey Brock of The Athletic tweets. Medical reviews still must be conducted before things will be official, but it seems the parameters are agreed upon. 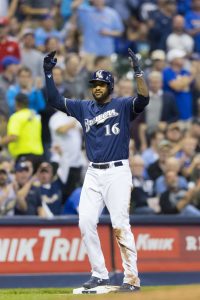 While the M’s are entering a sort of rebuilding phase, with the Brewers aiming to repeat their NL Central crown, this swap will send a notable MLB asset out west. That can be explained by Santana’s messy 2018 season, which largely knocked him out of the plans for Milwaukee.

Santana had turned in a highly productive, albeit strikeout-riddled, 2017 season. But the Brewers nevertheless pursued offseason outfield upgrades and the 26-year-old ended up cratering to open the ensuing campaign. Santana was demoted after 62 games of .249/.313/.354 hitting to open the year.

As it turned out, Santana got things going at Triple-A and returned with a nice (albeit brief) late-season run. He performed well enough to earn a not-insignificant postseason role, but not enough to write his way back into any future lineup cards. With no options remaining, a departure seemed the likeliest outcome.

The Mariners, though, will gladly take a shot at seeing whether Santana can get back to the thirty-homer, .371 OBP output that he produced in ’17. He’ll cost a projected $2.0MM in his first season of arbitration eligibility, leaving two more seasons of control still remaining thereafter.

Doing so will cost Seattle a chance to see more of Gamel, a left-handed-hitting asset who perhaps better fits the Brewers roster — particularly since he can still be optioned. The M’s had been loaded up on lefties, including recently acquired outfielders Mallex Smith and Jay Bruce.

Out in Milwaukee, it’s possible to imagine Gamel functioning as a bench mate to pair at times with Ryan Braun. The club had utilized the lefty-swinging Eric Thames at times in the corner outfield, though it’s fair to wonder whether that experiment will continue.

Gamel has hit at just above the league-average rate over the past two seasons, runs the bases well, and is capable of playing all three outfield positions (though he has mostly been utilized in the corners). He has not carried significant platoon splits to this point in his MLB career, which suggests he’s more of a general reserve than a strict platoon option.

As for Zavolas, the 22-year-old Harvard product had a nice debut showing in the Mariners system. In 38 2/3 innings, mostly at the low A level but also including three High-A appearances, he pitched to a 3.03 ERA with 9.5 K/9 and 2.6 BB/9. His outlook isn’t clear, but that’s impressive progress for a player who was selected in the 18th round just last summer.