6:40pm: Minnesota has issued a press release to announce the signing.

3:36pm: Free agent second baseman Jonathan Schoop is finalizing a one-year deal with the Minnesota Twins. The deal will be worth $7.5MM plus incentives, per the Athletic’s Ken Rosenthal (Twitter links). A physical has already been completed, he adds. 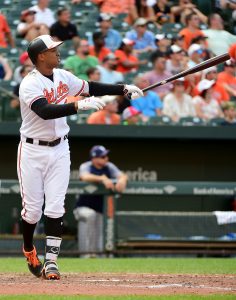 Schoop, 27, represents a high-upside play for the Twins on a team full of them. He joins fellow non-tender C.J. Cron in the infield, but the Twins also figure to give bounceback hopefuls Byron Buxton and Miguel Sano a chance to get their careers back on track. Schoop and Sano were both All-Stars in 2017 when Buxton won a Gold Glove and finished 18th in MVP voting (Schoop finished 12th). Production from all three cratered last season.

The former Orioles and Brewers second baseman was one of the more interesting free agents available given his on-field volatility. He disappointed in Milwaukee, managing a meager .202/.246/.331 with four home runs after he was acquired at the trade deadline — but it wasn’t that long ago that Schoop put up a 5.2 rWAR season in Baltimore. Schoop has three consecutive seasons of more than 20 home runs, including a career-high 32 dingers during that tremendous 2017 campaign with the Orioles.

Brewers GM David Stearns recently took responsibility for the deadline deal in a recent piece from Tom Haudricourt of the Milwaukee Journal Sentinel. The Brewers surrendered quite a bit of talent for what turned out to be only a half season of less-than-ideal contributions from Schoop, who lost playing time in the playoffs to regular third baseman Travis Shaw. The Brewers chose not to tender Schoop a contract rather than pay him the projected arbitration salary of $10.1MM.

Schoop will take only a small pay cut from the $8.5MM he earned last year, though his final earnings may, of course, change depending on the particulars of the incentives involved.